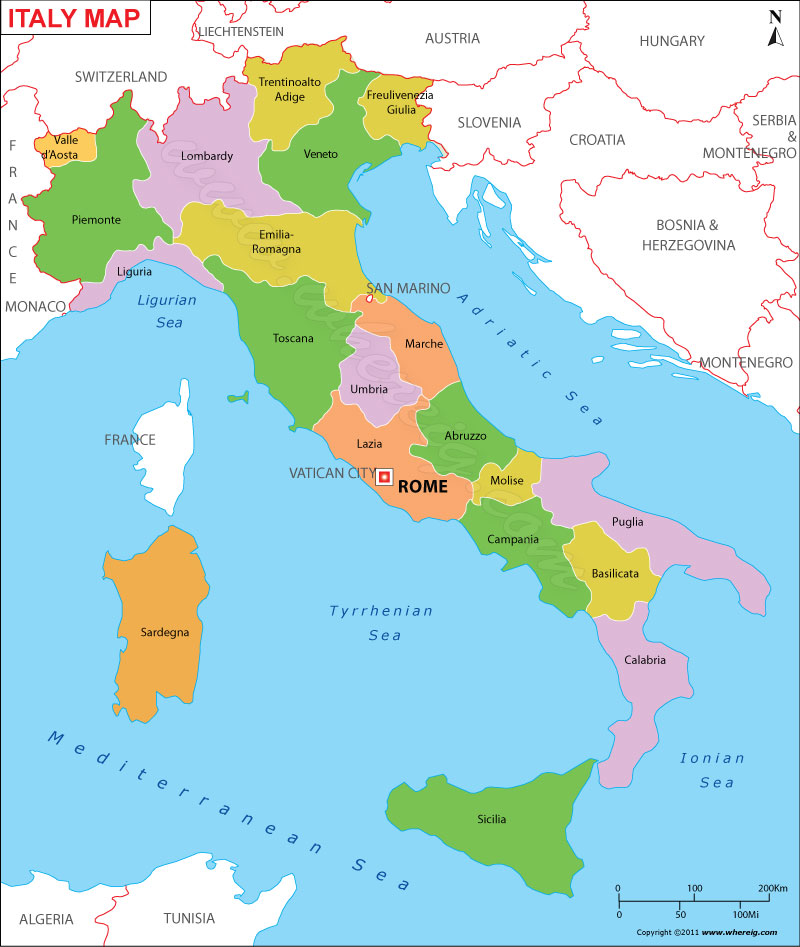 Italy is one of the best-loved tourist destinations the world over. The culture, language, heritage, beauty and food of Italy are credited with this incredible allure. The MapsofWorld Map of Italy combines the best-known tourist attractions of the country, the major cities, the road network, the important airports, the national parks, mountain peaks, lakes, ports and international boundaries of Italy. Major cities plotted on the map include Sicily, Naples, Venice, Rome, Milan, Bologna, Siena, Verona and Florence. The most popular attractions of Italy are Blue Grotto, Via Cola di Rienzo, the Colosseum, St Peter's Basilica, Piazza Spagna, the Leaning Tower of Pisa, Lake Garda, and the Dolomites. Apart from the numerous lakes that dot the country, there are many national parks in Italy such as the Alta Murgia National Park, the Gargano National Park and the Abruzzo National Park. Mont Blanc, Courmayeur, at 15771 feet, is the highest peak in the country. Other important peaks are Mt Etna, Punta La Marmora, Ortles, Gran Paradiso and Matterhorn.

Italy is a peninsula in southern Europe, jutting out into the Mediterranean Sea, along with its two large islands, Sicily and Sardinia. Italy borders France, Switzerland, Austria, and Slovenia across its northern boundaries. The rest of Italy borders only the Mediterranean Sea, though is a short distance from Croatia, Greece, and parts of northern Africa. Within the country of Italy are the independent states, San Marino and Vatican City. An Italian exclave is located in Switzerland is called Campione d'Italia.
Major mountain ranges, the Alps and the Apennines, traverse the country. Major rivers in Italy are the Po, the Arno, and the Tiber. Italy is also home to fourteen volcanoes, though only three are active: Etna, Pompeii and Herculaneum. Italy boasts a Mediterranean climate, and has a long coastline and many beaches.

Italy is governed by a parliamentary republic, with a president as the head of state, and a prime minister, who is titled the President of the Council of Ministers, and is the head of government. The bicameral parliament includes the Senate of the Republic and the Chamber of Deputies. Italy is divided into twenty regions, and further divided into 110 provinces and 8,100 municipalities. Each region is autonomous and has a centralized capital to handle its affairs.


Regions of Italy and their capital cities

Italy is one of the most popular tourist destinations in the world, with many famous cities, countrysides, and historical landmarks that draw travelers to their well preserved beauty. Rome, the capital, is a large city with a famous historical site around every corner, from the Colosseum to the Pantheon and the Vatican. Florence has world famous landmarks and works of art housed in its many museums, while Venice's canals offer gondola rides and romantic restaurants. The beautiful coastlines and islands of Italy bring visitors for relaxing summer vacations.
Italy is perhaps best known for its food and wine, with many specialties like pasta, pizza, and panini, and other regional specialties can be sampled around the country. Vineyards are found up and down the country, often in the cities or regions after which the wine varieties are named.

Mount Etna in Sicily is the world's most active volcano.
Italy is the fourth most visited country in the world.
Saint Peter's Basilica at the Vatican is the largest Christian church in the world.
Italy's regions have their own dialects, which are quite different from standard Italian. Today's standard Italian is based on the Florentine dialect.
Milan, the second largest city in Italy, is one of the big four fashion capitals in the world. Major Italian fashion houses include Gucci, Armani, Versace, Prada, Dolce & Gabbana, and Valentino.