The given Ukraine location map shows that Ukraine is located in the eastern part of Europe. Ukraine map also shows that it shares its international boundaries with Russian Federation in the east and north-east, Belarus in the north-west, Poland, Slovakia and Hungary in the west, Romania and Moldova in the south-west. Besides, Black Sea lies in the south of the country. The climate type of Ukraine is mainly temperate continental climate.

Where is Ukraine Located in World Map 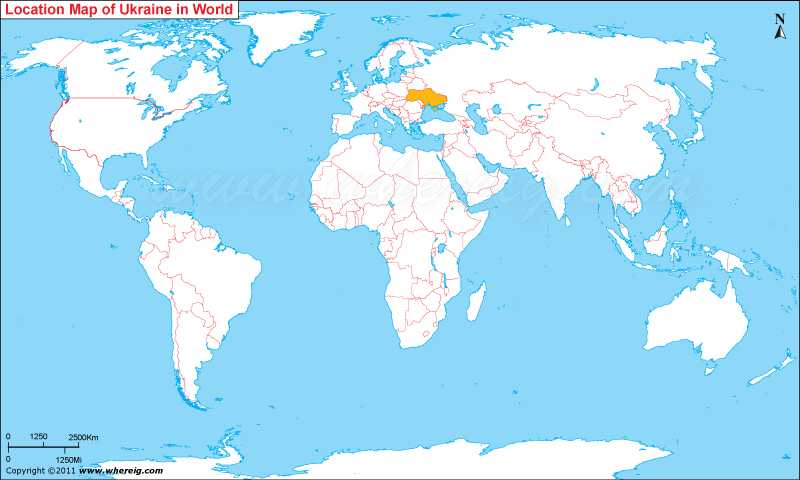 About Map: The map showing location of Ukraine in the World Map.

Where is Ukraine Located?

Ukraine is located in eastern Europe. Ukraine is bordered by the Black Sea and the Sea of Azov to the south, Russia to the east and north, Poland, Slovakia, and Hungary to the west, Belarus to the north, and Romania and Moldova to the south. It is the second-largest European country, after Russia and largest country in Eastern Europe. It covers an area of 233,062 sq mi (603,628 sq km), with a population of 41.2 million (2022 estimate), and the 8th most populous country in Europe.

Ukraine has very long political history; however, finally, it got its independence in the year 1991 i.e. after the dissolution of USSR. The capital city of Ukraine is Kiev. The government type of Ukraine is a republic under a mixed semi-parliamentary semi-presidential system. However, the legislative, the executive, and the judicial all are separate branches. Under this political system, the head of state is the President who is elected by popular vote for a five-year term.

Moreover, the economy of the country is perceptibly growing economy. The national policies are gradually adopting the free-market economy. The country has quite developed industries; however, for energy resources, Ukraine remains dependent upon Russia. Ukraine is one of NATO’s enhanced opportunity partners.

Ukraine is one of the Eastern Europe countries and second biggest country in terms of arena in Europe. Ukraine is bordered by 7 European Nations; Russia to the east and northeast, Belarus in the north, Poland, Slovakia and Hungary in the west and Romania and Moldova are located south of Ukraine. The country has a total area of 233,062 Square miles. The capital city of Ukraine is Kyiv, which is the biggest city in the country. The population is Ukraine according to Worldometer elaboration of the latest United Nation data, 43,300,966.

Ukraine is in fact the second biggest nation after Russia which lies between latitudes 44 and 53 N, and longitudes 22 and 41 E. Geography of Ukraine is unique in its nature as it has diverse geographic features. Ukraine has highlands as well as lowlands. It consists of fertile plains and plateaus. The Carpathian Mountains are only the mountains that one can locate in Ukraine, which are located in Crimea. Major rivers include the Desna, Dnieper, Dniester, Donets and the Southern Bug. The natural resources of Ukraine include iron, ore, manganese, coal, oil, natural gas, nickel, titanium, sulphur, mercury, graphite, timber and Kaolin. The country is blessed with an abundance of arable land. One of the resources of the country, which makes most of the regions fertile, is black soil.

The capital city of Ukraine is Kyiv. It is located in north-central Ukraine along the Dnieper River.

Ukraine is divided into 24 provinces (oblast), 1 autonomous republic and 2 municipalities.

Largest Cities in Ukraine (by Population)

Ukraine has a population of around 41.2 million inhabitants, Ukraine has 5 cities with more than a million people, Kyiv is the most populous city in the country.

Distance from Ukraine to Neighbouring Countries

Driving Distance from Kiev, Ukraine to Other European Cities

Best Places to Visit in the Ukraine

Ukraine offers a lot of attractions for the seekers of pleasure and for the people who would like to explore natural beauty and appreciate it in the world. The country is known for celebrating festivals, rich culture and a few centuries old architecture.

Some of the must visit places in Ukraine are as follows

The European countries of NATO - Belgium, Canada, Denmark, France, Iceland, Italy, Luxembourg, the Netherlands, Norway, Portugal, the United Kingdom, and the United States have come out in full support of Ukraine.