Idaho County Map, List of Counties in Idaho and Seats

The U.S. state of Idaho is divided into 44 Counties. Explore the Idaho County Map, all Counties list along with their County Seats in alphabetical order and their population, areas and the date of formation. 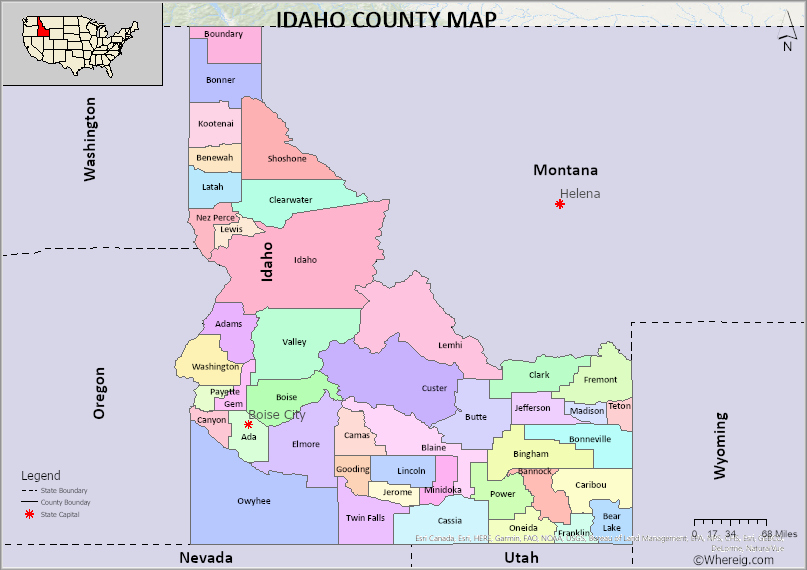 About Counties in Idaho

Idaho is one of the states of America that is situated in the Pacific Northwest region of the country. The state shares the borders with Montana and Wyoming to the east, Nevada and Utah to the south, Washington and Oregon to the west. The state shares an international border with the another called country Canada. Idaho ranks as 14th largest state having geographical area in United States. The capital city of Idaho is Boise. Boise is in fact biggest city of the state. According to the census taken in the year 2019, the population of the state is 1.787 million. The nick name of Idaho is “The Gem State”. It was nicknamed like that, because a variety of gems, one can find, in the state. According a survey, around 72 different types of gemstones are found in the state Idaho.

The state of Idaho has three branches of Government like any other states of United States of America. They Legislative branch, Executive branch and Judicial branch. The state government`s primary unit of local government is County in the state. Counties are vested with political powers and in fact they are small administrative bodies of the state government.

The U.S. state of Idaho has 44 Counties. This is list of Idaho Counties and County Seats in alphabetical order along with check their population, areas and the date of formation.

Click on any County for its detailed Map and Info.
County Map of U.S. 50 States
Edited by: Vijay Kanth | Updated: October 05, 2022