Argentina is a country located in the Southern South America and lies between latitudes 34.0° South and longitudes 64.00° West./p> 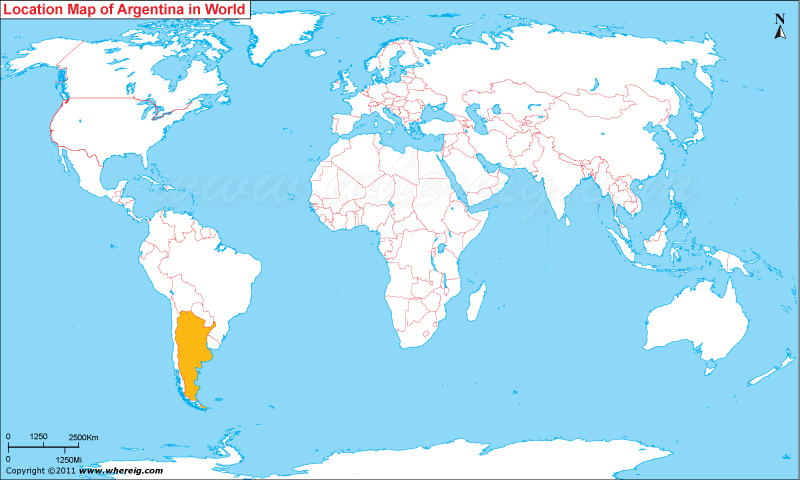 About Map: Map showing location of Argentina in the World.

Where is Argentina Located?

Argentina, is the second largest country in South America, constituted as a federation of 23 provinces and an autonomous city, Buenos Aires. Argentina is bordered by Chile, Bolivia, Paraguay, Brazil, Uruguay and the Atlantic Ocean.

It is the eighth-largest country in the world by land area and the largest among Spanish-speaking nations, though Mexico, Colombia and Spain are more populous. Argentina's continental area is between the Andes mountain range in the west and the Atlantic Ocean in the east.

Visitors attraction of Argentina are:-
Buenos Aires: place of assorted quintessence of the Argentinean culture.
Iguazu Falls : The falls is often called as the gateway to Argentina. Taller than the Niagara, it is an amazing sight to experience tons of water throwing themselves over the cliffs.

Mendoza : Medoza is the ideal destination for the lovers and admirers of wine and food. It also offers remarkable sights in and around the Andes Mountains, which is also a known destination for adventure sports. Salta :

The Atlantic Coast : There are plenty of hotels and villas that offer magical views of the ocean in the Mar del Plata city
Argentina Facts
South America Countries Location Maps