Oklahoma County Map, List of Counties in Oklahoma with Seats

The U.S. state of Oklahoma is divided into 77 Counties. Explore the Oklahoma County Map, all Counties list along with their County Seats in alphabetical order and their population, areas and the date of formation. 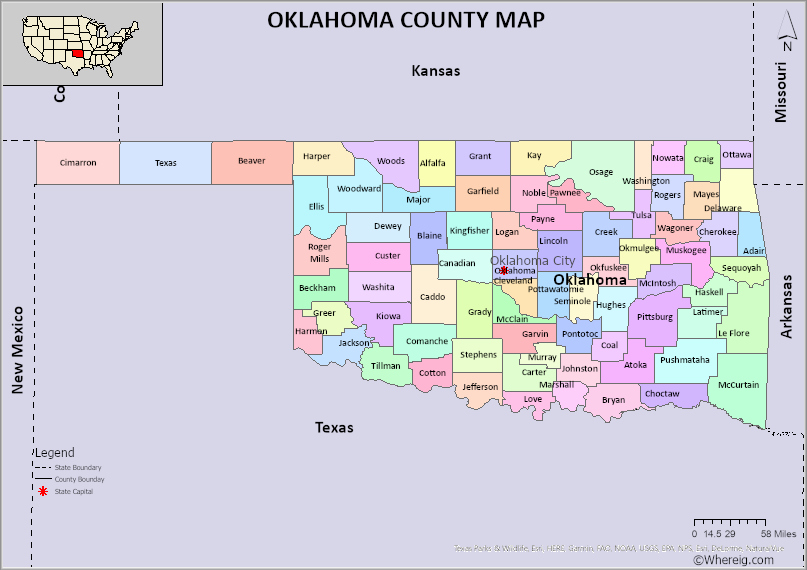 About Counties of Oklahoma

Oklahoma is one among fifty states of United States of America. The state is located in the south central part of the country. Oklahoma shares the borders with Texas in south, Kansas in north, Arkansas in east and New Mexico in west. The capital city of the state is Oklahoma City. Of all the Counties of Oklahoma, Oklahoma County has the highest population in the state with population of 796,292. Tulsa County and Cleveland County rank as second and third counties respectively as they have the highest number of population after Oklahoma County. The least populated county in the state of Oklahoma is Cimarron County. Among Counties of Oklahoma McIntosh County is considered as the oldest county in the state. The largest county by its area is Osage as it has 2,041.26 square miles. The second biggest county in terms of area is Texas.

Counties of Oklahoma are 77 in number. The state ranks seventeenth in terms of having a number of counties. U.S state of Oklahoma initially had seven counties in the beginning. They are Logan, Cleveland, Oklahoma, Canadian, Kingfisher, Payne and Beaver. These were renamed later. Oklahoma became a state in the year 1907 under the leadership of Theodore Roosevelt who was then president of the country. There are four types of local governments in the state of Oklahoma. They are Counties, Municipalities, special districts and school districts.

Counties have a major role to play in providing services to the people of the place as they are the largest units of local governance. The state Oklahoma is divided into 77 counties which are further divided into 597 incorporated municipalities which consist of cities and towns. There are two kinds of municipal governments; City government and Town government. Any geographical place in order to become a city, it must have at least the population of 1,000. The cities of Oklahoma follow a Council- Manager form of government. Counties of Oklahoma and other local governing bodies provide a lot of public services to the citizens like Public safety services like police, fire and ambulance, Environment and housing services like taking care of Sewerage, solid waste, parks and buildings and other Utilities like water, electric and public, transport and Education. Hence by providing different services to the inhabitants of the state, local government is shaping the lives of the people.

The U.S. state of Oklahoma has 77 Counties. This is list of Oklahoma Counties and County Seats in alphabetical order along with check their population, areas and the date of formation.