Hawaii (HI), is the only state in USA that is composed of many Islands. The newest of the 50 states of United States, Hawaii is made up of group of islands. Hawaii has a coastline of about 750 miles. It is the 13th most densely populated state in US. The capital of Hawaii is Honolulu which is on the island of O'ahu. 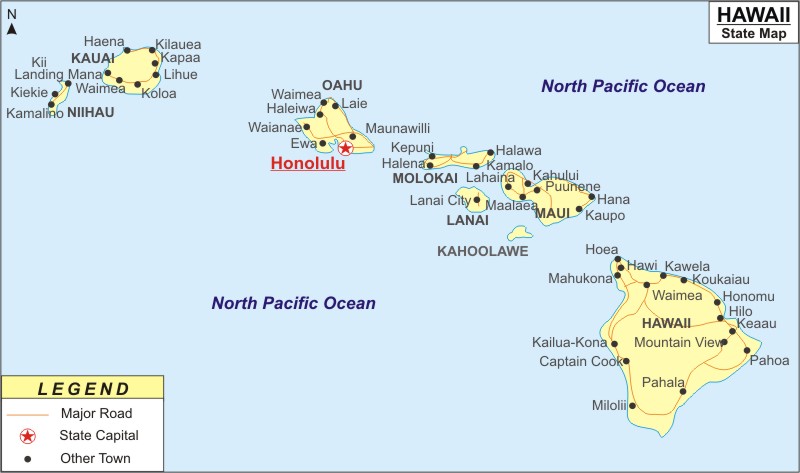 Hawaii Map, Since its admission to statehood on August 21, 1959, Hawaii has become the newest state in the United States of America. It is a group of islands located away from the mainland of the country in the Pacific Ocean. Hawaii lies to the west of the United States. The state encompasses a total area of 10,931 sq miles. A Hawaii Map is the ultimate guide to explore the magnificence of the Aloha State. The state of HI is famous for its sugar, pineapple, and fishing industries, tourism, and culture. The capital of Hawaii is Honolulu and it is the biggest city as well.

From 1810 to 1893, the sovereign Kingdom of Hawaii was in prevalence. This was replaced by a republic that lasted till 1898. It was then annexed by the United States as a territory. It was granted full-fledged statehood on August 21, 1959.

Hawaii is an archipelago of islands in the central Pacific Ocean, and holds the distinction of being the only US state that is completely comprised of islands. The main islands of the state are Hawai'i, Maui, O'ahu, Kaua'i, Moloka'i, Lana'i, Ni'ihau,and Koho'olawe.
The island archipelago is located some 2,000 miles southwest of the US mainland. The islands have been formed through continuous activity of tectonic plates. The active volcanoes of Hawaii are located in the southern half of the island named Hawa'i. The state of Hawaii is host to a whole variety of flora and fauna and a whole range of environments from its tropical climate to its high altitude.

Hawaii has a marvellous natural scenery and a warm climate. It is surrounded by ocean all around and has fantastic beaches and volcanoes. All of the above make the state a hot spot for tourism.
Popular sites that are not to be missed are Pearl Harbour, Hawaii Volcanoes National Park, Polynesian Cultural Centre, Diamond Head, Hanauma Bay, Honolulu Zoo, Waikiki Aquarium, Lanikai Beach, Waimea Canyon State Park, and so much more.


Economy of Hawaii Tourism forms an important segment of the Hawaiian economy. Other important financial sectors are agriculture, education, and military. It exports garments and food.

US Highways and State Routes in Hawaii