France officially the French Republic is a country, located in western Europe and lies between latitudes 47.0000° North and longitudes 2.0000° East. France is bordered by the English Channel and Bay of Biscay; Switzerland, Italy and Monaco to the east, Belgium, Luxembourg, and Germany to the north and Andorra, Spain to the south. 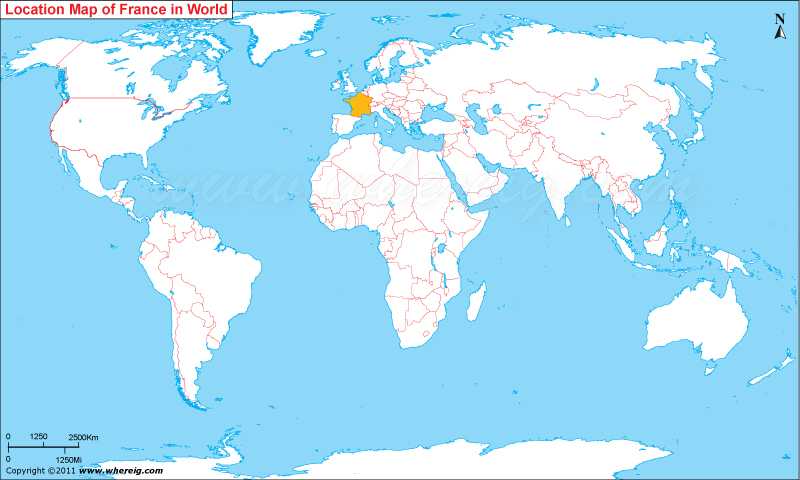 About Map: The map showing location of France in the World Map.

Where is France Located?

The given France location map shows that France is located in the western part of Europe continent. The France map also shows that it shares its international boundaries with Spain and Andorra in the south and Belgium, Luxembourg, Germany, Switzerland, Italy and Monaco from north to north east respectively. Besides, as one can clearly observe on the given map of France that the country extends from the Mediterranean Sea to the English Channel and the North Sea from east to west and north-west; and from the Rhine to the Atlantic Ocean from north to south. So, France is also sometimes known as Hexagone because of its geometric shape.

The Great Britain (group of Islands country) is separated from France by English Channel; surprisingly, a few years ago, this channel has been linked with the Channel Tunnel, which passes underneath the water of English Channel connecting UK and France. France is one of the most developed nations of the world; in addition, it has the second-largest Exclusive Economic Zone in the world. Not only this, from the history, France has remained as a major power with rich cultural, economic richness, military and political influence in Europe and as well as in the world. France has many satellite territories in the Pacific Ocean as well as in the Atlantic Ocean. Above all, France has high standard of living along with a high public education level; hence, it has one of the world's highest life expectancies.

The Government type of France is a unitary semi-presidential republic; however, its main ideals expressed in the Declaration of the Rights of Man and of the Citizen. In addition, France is a founding member of the United Nations along with one of the five permanent members of the UN Security Council, and a member of the Francophonie, the G7, G20, EU, OECD, WTO, NATO, and the Latin Union.

Moreover, France is one of the top tourist destinations of the world who receives millions of tourists every year. Tourists from all over the world find here so many attractive places and pleasure at one place including natural landscapes, beautiful cities (examples of tourists places are Paris, Versailles, Mont Saint-Michel, Loire Valley. etc), tantalizing culture, friendly people, world famous French wine i.e. Champagne and many more that collectively entrain tourists the fullest.

Point of Interest in France