Texas County Map, List of Counties in Texas with Seats

The U.S. state of Texas is divided into 254 Counties. Explore the Texas County Map, all Counties list along with their County Seats in alphabetical order and their population, areas and the date of formation. 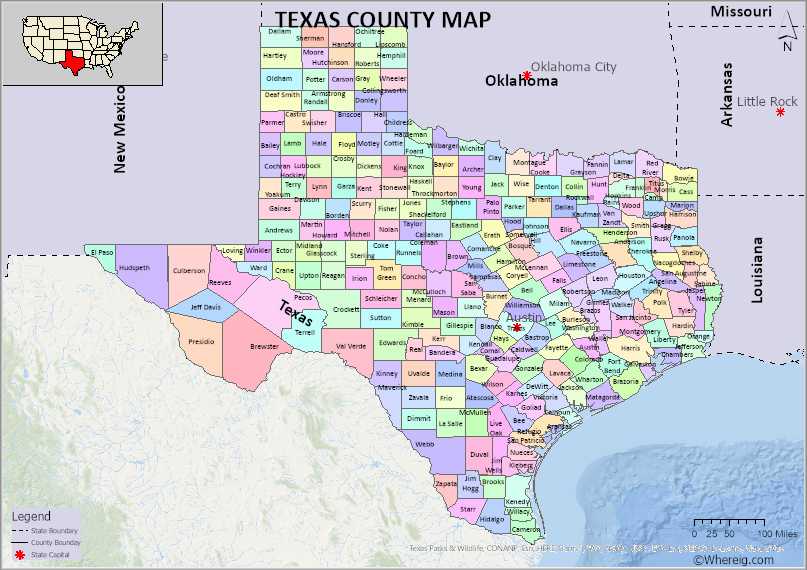 About Counties of Texas

U.S state of Texas is located in the South Central part of the country. The area of Texas is 268,596 square miles which accounts for 695,662 square kilometres. Texas is the second biggest state of fifty states of United States. Texas is bordered by Louisiana to the east, Arkansas to the northeast, Oklahoma to the north, New Mexico to the west and states of Mexico namely Chihuahua, Coahuila, Nuevo Leon and Tamaulipas to the south and southwest. The state is nicknamed as the ‘Lone Star State’. Texas is in fact known for its ethnic diversity and has a lot beautiful tiny towns. The capital city of the state is Austin. The capital city is famous for its scrumptious food, fantastic ear feasting live music places and its weirdness.

The government of Texas functions and operates under the supreme law of the land that is Constitution of the state. The government of Texas consist of three branches. They are Executive branch, Legislative branch and Judiciary branch. The executive branch of the government is headed by the governor of the state which consists of many boards and commissions. The legislature of Texas is bicameral which consists of two houses and they are House of Representatives and Senate. Judiciary branch has a number of courts functioning and helping citizens of the state. The highest court in the state is the Supreme Court.

Counties in Texas are 254 in number. Each and every county is administered by a body commissioners. This court of commissioners` comprised of 4 to 5 members. The local government of the state Texas consists of County government, municipalities and special districts. Among the counties in Texas Brewster County is the biggest county by area in Texas. The other bigger counties after Brewster are Pecos, Hudspeth and Presidio. Of all the Counties in Texas the county that has the highest number of population is Harris County with 4,731,145 inhabitants. Dallas County stands as second in position in terms of population. Collin which is one of Counties in Texas ranks as the number in per capita Income wit $42,220. The other wealthiest counties in the state are Borden, King and Loving with $40,916, $39,511 and $37,362.

The U.S. state of Texas has 254 Counties. This is list of Texas Counties and County Seats in alphabetical order along with check their population, areas and the date of formation.