Arizona County Map, List of Counties in Arizona with Seats

The U.S. state of Arizona is divided into 15 counties. Explore the Arizona County Map, list of Counties in Arizona along with their County Seats in alphabetical order along with their population, areas and the date of formation. 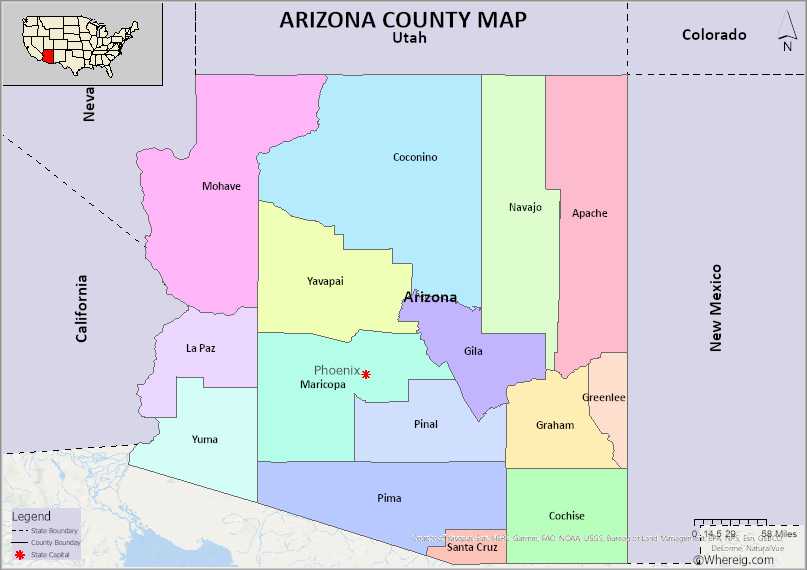 Arizona is one of the southwestern states of United States of America. Arizona ranked as 6th largest state in U.S. The capital city of the state is Phoenix. Phoenix is in fact the largest city of Arizona. The state has 113594 square miles area. It has fifteen counties. Arizona is bordered with Utah towards north and New Mexico to the east, Nevada and California share boarder in west and towards south Baja California is situated. The climatic condition of southern Arizona is extremely hot in summer and pleasant in winter, in Northern Arizona has the modest summer and winter snowfalls.

Arizona is known for its unique natural beauty and it has 35 state parks and natural areas preserving its precious ecosystem. The great Grand Canyon National Park which is one of the seven wonders of the world is located in the state of Arizona. Copper is abundant in Arizona. Queen of Copper mine is known as Bisbee.

The U.S. state of Arizona has 15 counties. This is list of Arizona Counties and County Seats in alphabetical order and check their population, areas and the date of formation.

Click on any county for Its detailed Map and Info
County Map of U.S. 50 States