Wisconsin County Map, List of Counties in Wisconsin with Seats

The U.S. state of Wisconsin is divided into 72 Counties. Explore the Wisconsin County Map, all Counties list along with their County Seats in alphabetical order and their population, areas and the date of formation. 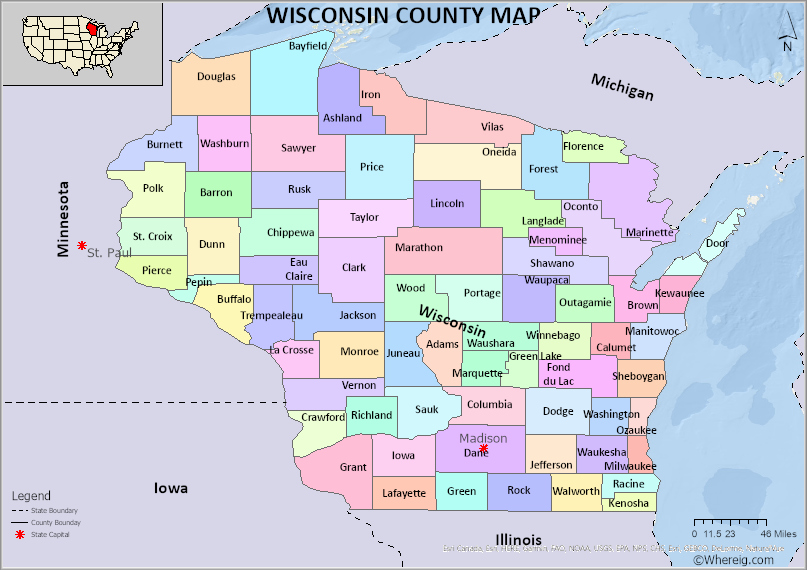 About Counties of Wisconsin

U.S state of Wisconsin is one of the fifty states of the country. The state is located in the Midwestern region of the country. Wisconsin shares the borders with Minnesota in the west, Iowa in the south-west; Illinois in the south, Lake Michigan is located in the north-east and Lake Superior in the north. The state of Wisconsin attained its statehood after the treaty of Paris. Wisconsin joined in the Union in the year 1848, as the thirtieth state. The state is the twenty-fifth largest state by area. Wisconsin is the twentieth populous state in the country. The famous cities of the state are Milwaukee, Madison, Green Bay and Kenosha.

Counties of Wisconsin are 72 in number. One of the counties of Wisconsin namely Milwaukee County is the most populous county with 939,489 people according to the census of 2020. The least populated county in the state is Menominee County with 4,255 inhabitants. Of all the Counties of Wisconsin Marathon is the biggest county by area, which occupied 1,544.91 square miles of state arena. The tiniest county in the state is Pepin County having 231.98 square miles. Among the counties in Wisconsin, Ozaukee was ranked first in earning highest per capita income with $39,778. Waukesha and Dane counties are in second and third position with $36,752 and $ 32,752. Counties of Wisconsin provide a number of services to the citizens like law enforcement, circuit courts, social services, vital records, road maintenance, and so on. The local government of county officials include Sheriffs, district attorneys, clerks, and treasurers, registers of deeds, surveyors, coroners and clerks of circuit. Officers are elected for a term of four years. Counties of Wisconsin are administered by county boards which are headed by a chairperson.

The U.S. state of Wisconsin has 72 Counties. This is list of Wisconsin Counties and County Seats in alphabetical order along with check their population, areas and the date of formation.