Where is Rome, Italy?

As shown in the given Rome location map that Rome is located on the Tiber River within the Lazio region in the central west of Peninsular Italy. Rome is the largest, most populated and capital city of Italy. 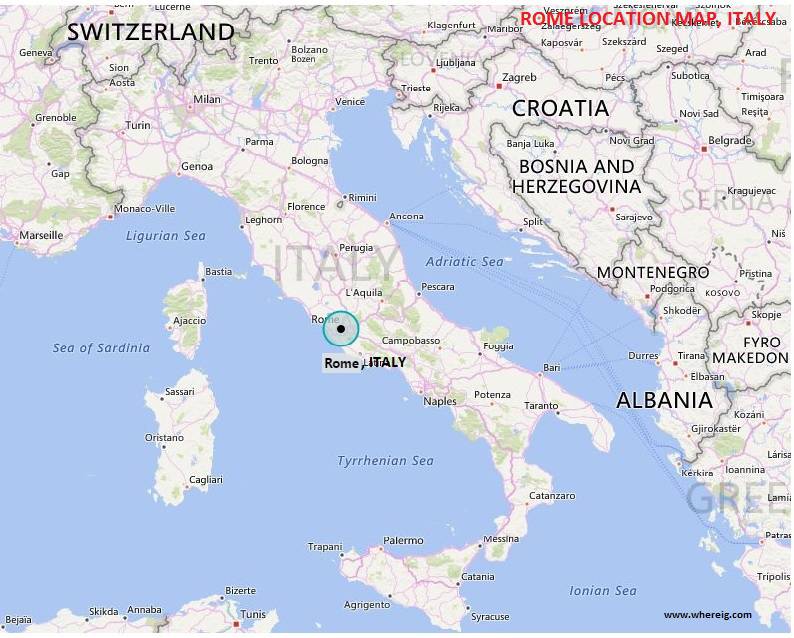 About Map: The map showing location map of Rome in Italy.

Where is Rome Located?

Rome (in Italian: Roma) the capital of Italy. The city is located at the Tiber River in the central-western portion of the Italy, about 15 miles (23 km) east off the coast of the Mediterranean Sea. It is the third most populous city in the European Union. Rome is founded in the ancient time; hence, its architecture over the centuries has developed beautiful and fascinating design especially from the Classical and Imperial Roman styles to modern Fascist architecture. The Roman classical style fascinates tourists from all corners of this world.

Though, there is hardly any heavy industry in Rome but its economy largely depends upon services, high-technology companies specifically IT, aerospace, defense, telecommunications; other significant sectors are research, construction and commercial activities (especially banking), and tourism. Besides, Rome is also the hub of the Italian film industry.

Moreover, Rome's classical architectural beauties in the modern landscapes deceive thousands of tourists. Because of all these reasons, in the year 2019, Rome was the 11th-most-visited city in the world and 3rd most visited city in the European Union. The most interesting places in Rome are monuments, museums (Vatican Museums and Colosseum Museum) and other natural landscapes. Most of the historic centers of Rome are listed as World Heritage Site by UNESCO.

Places to Visit in Rome