Georgia County Map, List of Counties in Georgia and Seats

The U.S. state of Georgia is divided into 159 Counties. Explore the Georgia County Map, list of 159 Counties in Georgia along with their County Seats in alphabetical order and their population, areas and the date of formation. 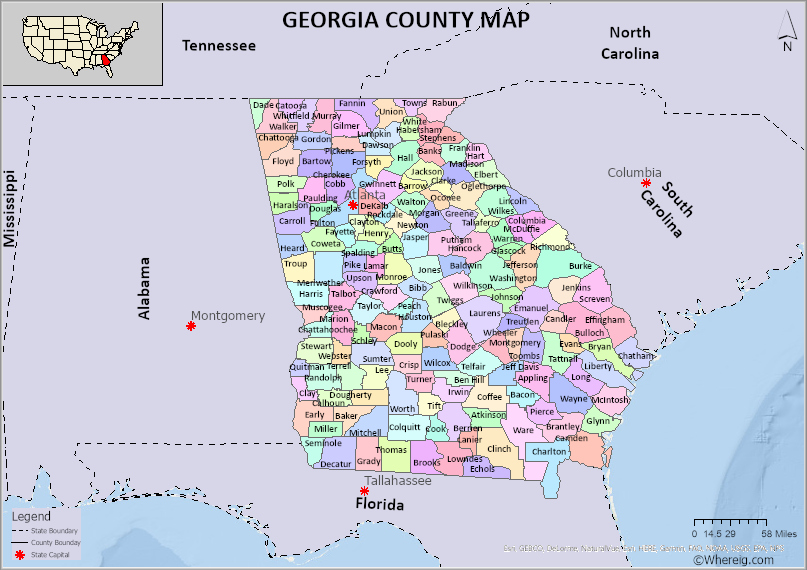 About Counties in Georgia

Georgia is a state which is located in the South-eastern region of the United State. Georgia is ranked as the 24th largest state in area among 50 states of United States of America. The capital city of Georgia is Atlanta. The state shares the borders with Tennessee and North Carolina towards north, South Carolina to the northeast, Florida to the south and Alabama to the west. Georgia is one the most populous state in the country and stands in 8th position. According to the census taken by census Bureau of United States of America the population of the state is 10,711,908. The climate of the state is very hot during the summer as it has humid summers and in winter, it is too cool as it has wild winter.

The number of Counties that exist in the state are 159. All the counties of Georgia vests with political power to rule themselves. The largest county of Georgia is Fulton County. The highest earning counties of Georgia are Forsyth County, Oconee County, Fayette County, Columbia County. Georgia has poorest county too, which is known as Telfair. The state is blessed with 537 cities. The richest place to visit in Georgia are Milton, Peachtree City, Dunwoody and many more. The smallest city of the state is Edge Hill.

Georgia follows like any other state in United States of America Federal Government, where powers vest on three branches of Government. Executive branch is headed by the Governor of the state. The Legislative authority rests on General Assembly which consist of Senate and House of Representatives. Senate is presided over by the Lieutenant Governor and the House of Representatives has its own speaker. The judicial powers are with Supreme Court of the state. With regarding local government in counties of Georgia, the counties have the privilege to elect their own legislative members who are called as Board of Commissioners. The constitution of Georgia provides Home Rule authority to all the counties and cities of the state.

The U.S. state of Georgia has 159 Counties. This is list of Georgia Counties in alphabetical order along with check their population, areas and the date of formation.