Explore France Map - France is located on the western parts of Europe, is the land of culture, fashion, food and fun. Sharing its borders with Germany, Switzerland, Italy, Monaco, Belgium, Luxembourg, Andorra and Spain, France covers a land area of 211,209 sq. miles. 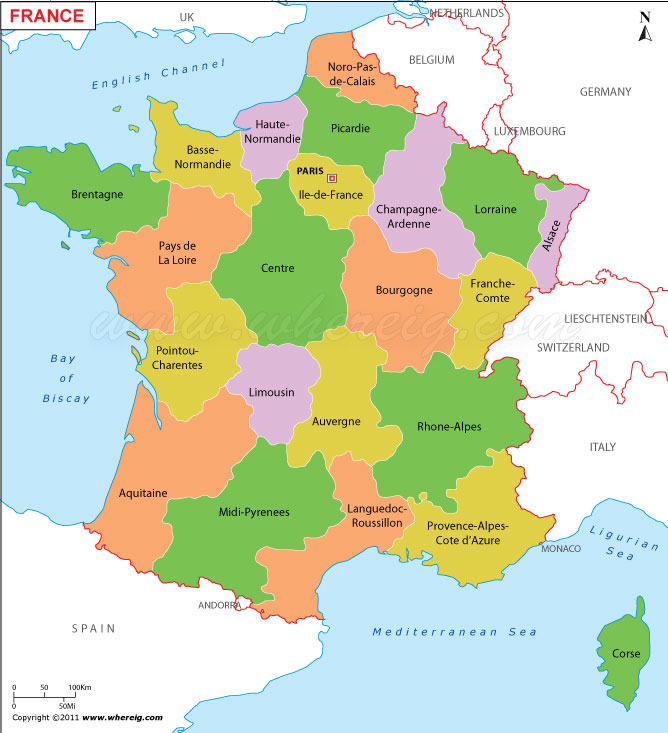 About Map: The map showing France Regions and National Capital. <

The France Map on Whereig.com enables you to get a comprehensive regions of France and National Capital. France, the haute couture of the world and the land of wine and delectable cuisine, is every traveler's dream destination.

France, formerly the French Republic, is a transcontinental nation with the majority of its territory in Western Europe. The capital of France is Paris. The official language of France is French. The total area of the country is 210,026 square miles that accounts for 543,965 square kilometers. Since ancient times, France, the largest nation in Western Europe, has served as a bridge between the northern and southern parts of the continent. Its extensive borders extend into Belgium and Germany in the north, the Atlantic Ocean in the west, the Pyrenees Mountains in the south, and Spain in the north.

The majority of the north and west are covered in vast, fertile plains, making France Europe's agricultural center. The southern center of France is occupied by the vast, forested Massif Central, a collection of old mountains and dormant volcanoes. The most ethnically diverse nation in Europe is France, which is also one of the oldest countries on the planet. France has historically been a global leader in almost all facets of culture, including food, winemaking, politics, philosophy, music, art, film, fashion, literature, and sports. France has a lot of land area, which can serve as a home for many different kinds of animals and plants. Its territory is covered with forests to a greater than 25% extent, and 50% of it is rural or agricultural terrain. Deer and wild boar inhabit lowland forests, while numerous other species, including chamois antelope, ibex, brown bears, and alpine hares, find shelter in the Alps and Pyrenees' woodlands.

France is a unitary, semi-presidential republic and a representative democracy. The executive branch of the government has two leaders they are the President of the Republic and the Prime Minister. The French Parliament is a bicameral body made up of an upper house, the Senate, and a lower house, the National Assembly. France has an evolved, high-income with mixed economy. France is regarded as an economic power, having joined the Group of Seven leading industrialized countries, the Organization for Economic Cooperation and Development (OECD), and the Group of Twenty largest economies. France is the third-biggest manufacturing country in Europe, and ranks eighth in the world by share of global manufacturing. France's agricultural sector is among the largest in value and leads the EU in terms of overall production.

Some of the important cities of France are Marseilles, Paris- France, Lyon, Nice, Bordeaux, Nantes, Strasbourg and cities in Normandy- France. The France train map and France travel guides available at Mapsofworld.com help you find out more details.

The France Map given here gives the outline of the political boundaries between the various regions of the country. It also marks the neighboring countries of France. The water bodies surrounding France, such as the North Sea, the English Channel, Atlantic Ocean, Bay of Biscay and Gulf of Lion, are also shown on this map. You can click on the France Map to get an enlarged version and detailed map of France.