The 25th most extensive and 5th most populous state of the 50 states of US is Illinois. The state is bordered by Iowa, Missouri, Kentucky, Indiana, Michigan and Wisconsin. 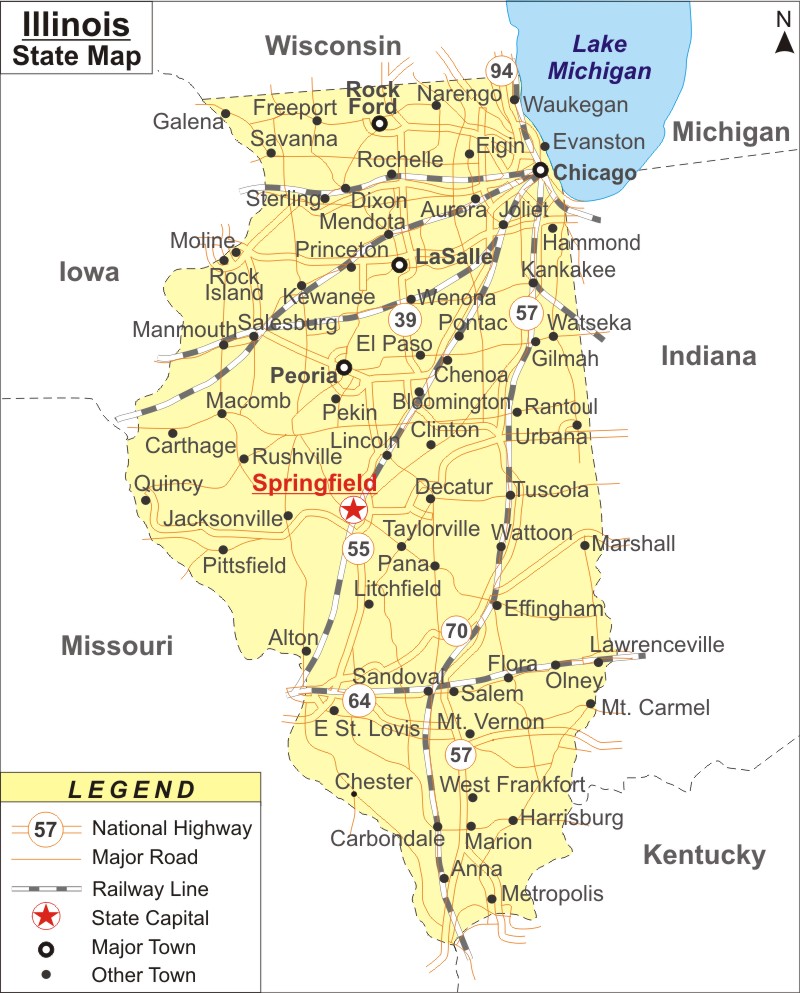 The total area of Illinois State is 57,918 square miles and is located on the eastern side of north-central United States. The state map of Illinois shows the 102 counties with their geographical location. The state is drained by Beaucoup Creek, Leaf, Ohio and West Okaw rivers. Comprising mainly flat regions, streams, lakes and rivers, Illinois State lies between 36º 58' and 42º 30' North Latitude and 87º 30' and 91º 31' West Longitude.

O'Hare International Airport in Chicago is the largest in the state and one of the busiest in the world. Besides, there is an extensive network of roads and railways, which connects the different parts of the state. The white-tailed deer is the state animal while the state bird is Cardinal. The Monarch Butterfly and Bluegill are the State Insect and State Fish, respectively. The populace of Illinois State has voted the Square Dance as the official dance of the state.

English is the official language while some people also speak Spanish. Christianity is the dominant religion in Illinois. Among the Christians, Protestants comprise the bulk of the population. Apart from Christians, a considerable presence of Hindus, Sikhs, Muslims and Jews is also found in the outskirts of Chicago.

Important Cities in Illinois by Population:

Chicago is the largest amongst the Illinois Cities. It is the third most populated city of the United States of America. Apart from Chicago, there are six other cities, which boast of a population of more than 1 lakh. These cities are Aurora, Rockford, Naperville, Joliet, Springfield and Peoria. Springfield is the capital of Illinois State.

US Highways and State Routes in Illinois