Where is Kentucky (KY)?

Kentucky is located in the East Central part of the United States. It is bordered by the states of Illinois, Ohio, Missouri, West Virginia, Virginia, Indiana and Tennessee. 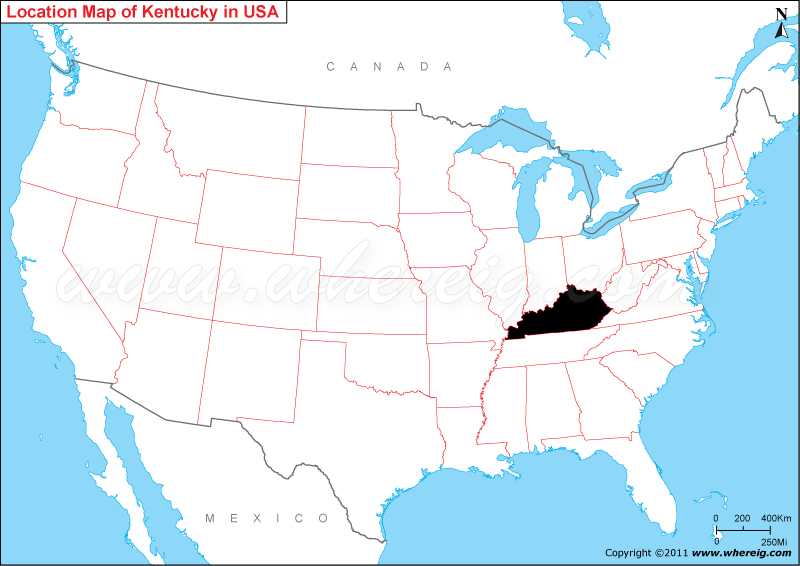 About Map: Map showing location of Kentucky in the United States.

Where is Kentucky Located?

Kentucky is one of the four states of the US that constituted as a commonwealth along with Virginia, Massachusetts, and Pennsylvania. However, initially Kentucky US was the part of Virginia, but in the year 1792, it is constituted as the 15th state of the Union.

As shown in the Kentucky location map that Kentucky is located in the central-eastern region of the US. It shares its shares its border with seven states. West Virginia lies in the east, Virginia in the southeast, Tennessee in the south, Illinois and Indiana in the northwest, Missouri in the west, and Ohio in the north and northeast of the state. Only Missouri and Tennessee, both of which border eight states, touch more states.

The interesting fact about Kentucky US is – it is more popularly known as the "Bluegrass State". This nickname has been given because of the fact that native bluegrass is found in many of the pasture areas throughout the state. In addition, the soil is also fertile of the Kentucky that makes possible the breeding of super-quality livestock, especially thoroughbred racing horses. It is a state of the US with varied environments and plentiful resources such as Mammoth Cave National Park; the greatest length of navigable waterways and streams in the Lower 48 states, and the world's longest cave system. Surprisingly, it is also the home of the maximum per capita number of deer and turkey in the US.