Map of Florida - Florida also known as the Sunshine State, is a state located in the southeastern region of the United States. Froida is the 22nd largest state by area and third-most populous state in the United States. The state is bordered to the west by the Gulf of Mexico, to the northwest by Alabama, to the north by Georgia, and to the east by the Atlantic Ocean. 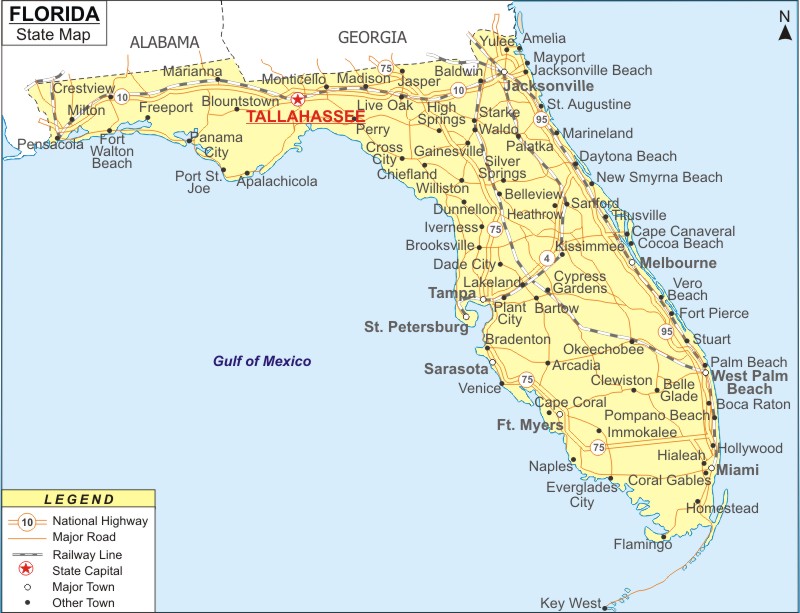 Disclaimer : This map was obtained from an edition of Whereig.com. All efforts have been made to make this image accurate. However Whereig.com and its directors do not own any responsibility for the correctness or authenticity of the same.

Florida is located in the southeastern portion of the United States. With two time zones (UTC -6:00 / -5:00 CT & UTC -5:00 / -4:00 ET), the state experiences varied climates all throughout the region. It has the longest coastline in the country, due to its borders - which are the Gulf of Mexico to the west, the Atlantic Ocean to the east, and the straits of Florida to the south.

The southern part of the state is characterized by its large Hispanic community, with Miami being the largest Latin city in the world found north of Mexico. The state is the 3rd most populous state in the nation, with a population of over 21 million and the 8th most densely populated. It covers an area of Spanning 65,758 square miles (170,310 km2). There are 67 counties, 267 cities, 123 towns, and 21 villages in the U.S. state of Florida, a total of 411 incorporated municipalities.

Its borders are Alabama and Georgia to the north, the Atlantic Ocean to the east, the Gulf of Mexico to the west, and the straits of Florida to its south. Its close proximity to the Bahamas and South American countries has created a unique culture that is quintessentially Florida, which is evident in the city of Miami.

Its highest point is Britton Hill, which sits at 345 feet above sea level, making it the lowest high point in the entire country. It has a total of 19 metropolitan areas, with Miami being the largest in the state, and that of the entire southeast United States.

The first inhabitants of the state were the Paleo-Indians believed to reside in the region about 14,000 years ago, as archaeological evidence shows. When the first Europeans arrived in Florida in the 16th century, several American Indians settled in the region, some of which were the Apalache, the Tocobaga, Timucua, Calusa, and Tequesta. Spanish explorer Juan Ponce de Leon is credited for being the first European to set foot in the region on April 2, 1513. He named the land La Florida, which means Flowery Land, due to the abundance of vegetation that was in bloom when he arrived during Easter.

Over the following hundred years, Florida was settled by the Spanish and the French. Great Britain was able to gain control over the region after the French were defeated and the Peace of Paris was implemented in 1763. Great Britain decided to separate the state to East Florida and West Florida.

The Spanish regained control over the 2 regions after the defeat of Britain by the colonies of America. By 1819, the East and West Florida regions were given to the United States for $5 million under the Adams-Onis Treaty, and became one single region once again. Florida achieved statehood on March 3, 1845.

Tourism is the biggest industry in Florida, followed by the agriculture sector. Florida's tourism consists of the best amusement parks in the world, high end beach front resorts, and national parks. The state is the biggest producers of citrus fruit, specifically oranges- which the state is known for. Other important industries include construction, life sciences, biomedicine, and international banking.

Over 60 million people visit the state each year. Due to its warm weather and hundreds of miles of coastline, people from all over the country and the world visit the state for its many tourist offerings. Among these popular tourist destinations are the amusement parks in Orlando, such as the Universal Orlando Resort, the Busch Gardens, and SeaWorld. Walt Disney World Resort is also located at Lake Buena Vista, contributing a major part in the state's tourism industry. It is the largest vacation resort in the entire world, complete with 4 major theme parks and over 20 hotels. Popular cities to visit are definitely Miami and St. Augustine. For the young tourist who wants to enjoy the best nightlife and art scene in the state, Miami boasts of vibrant cultures, beautiful beaches, a lively atmosphere in South Beach, art festivals, and its famous art deco architecture found all around the city.

For the tourist who wants a little bit of history, the city of St. Augustine offers cobble-stone streets, charming cafes and restos, museums, and horse-drawn carriages found in its Historic Center. Established in 1565 by the Spaniards, this city is the oldest continuous settlement in the country.

List of Counties in Florida - Explore Map of Each County

There are 67 counties in the U.S. state of Florida that is home to more than 21 million people.

US Highways and State Routes include