Great Britain, therefore, is a geographic term referring to the island that is home to the countries of England, Wales, and Scotland. 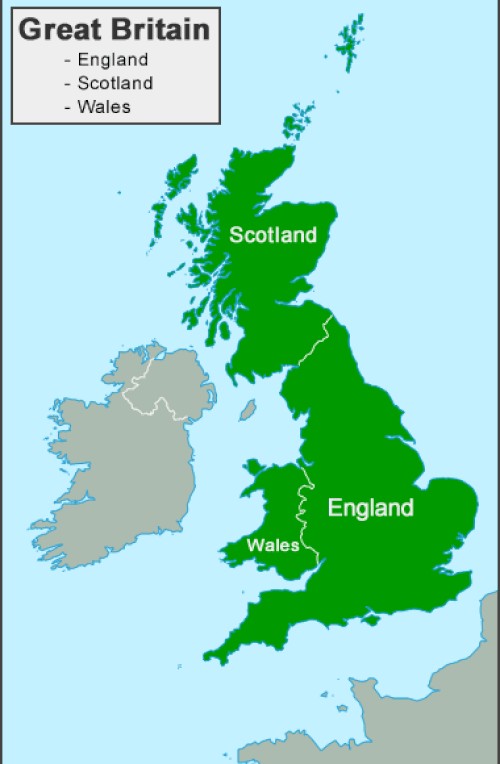 About Map:The map showing location of Great Britain in the United Kingdom (UK).

Where is Great Britain Located?

Great Britain, also called Britain, is an island in the North Atlantic Ocean off the western coast of Europe and consisting of England, Scotland, and Wales. It is the largest of the British Isles, the largest European island, and the ninth-largest island in the world.

Great Britain is an island in the North Atlantic Ocean off the northwest coast of continental Europe. England, Scotland, and Wales, along with any of their constituent neighboring islands, are collectively referred to as "Great Britain." The United Kingdom today consists of Great Britain and Northern Ireland. Great Britain is located on the Eurasian Plate's European Continental Shelf, off the coast of continental Europe, and is a portion of the Eurasian Plate. The English Channel, which narrows at the Straits of Dover, and the North Sea separate Great Britain from the European mainland. According to Worldometer's analysis of the most recent United Nations data, the population of the United Kingdom is 68,696,018.

Over a very long time, a number of plate tectonic processes have affected Great Britain. Because of its turbulent geological history, the island exhibits a wide range of landforms. The island's small land area, the relatively young age of habitats created during the last glacial period, the physical separation of the island from continental Europe, and the impacts of seasonal unpredictability all contribute to the island's low animal diversity. There are numerous species of bats, shrews, European moles, European rabbits, and European hare in great numbers. Weasels, stoats, red foxes, Eurasian badgers, Eurasian otters, and the elusive Scottish wildcat are among the carnivorous mammals. On or around British shorelines and coastlines, different species of seal, whale, and dolphin can be found.

Great Britain was one of the world's most important centers of cultural development and was a vital part of the British Empire. Despite its flaws, the imperial system left behind a cultural, intellectual, legal, and political heritage that has been embraced by a large portion of the world.

Great Britain is an island off the northwestern coast of continental Europe. With Wales, Scotland, and England as its constituent parts, Great Britain is the biggest island in all of Europe. Although the phrases "Great Britain" and "United Kingdom" are frequently used interchangeably, the U.K. also refers to Great Britain as well as Northern Ireland, a handful of offshore islands, and many other overseas territories.

The list below shows the most populated urban areas in the Great Britain, United Kingdom.