Croatia officially the Republic of Croatia, Croatia is a Country situated between central and eastern Europe bordering the Adriatic Sea between Slovenia and Bosnia and Herzegovina. It lies between latitudes 45.1000° North and longitudes 15.2000° East. 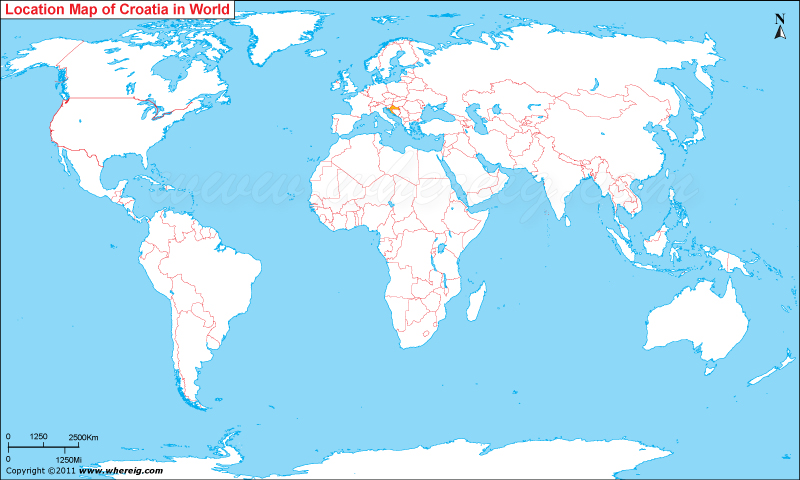 About Map: Map showing Where is Croatia located on the World Map.

Where is Croatia Located?

The given location map of Croatia shows that Croatia is located in the central-south part of Europe continent. Croatia map also shows that Croatia shares its international boundaries with Slovenia in the north, Italy in the west, Hungary in the northeast, Bosnia-Herzegovina in the southeast, Serbia in the east, and Montenegro in the southeast. It also has coastline opening into the Adriatic Sea.

Croatia has had long history of its governance system under which it was ruled hundreds of years by several rulers; however, in the year 1991, Croatia became independence. Likewise, Croatia adopted a democratic parliamentary republic characterized with multi-party system. Besides, Croatia is member of the United Nations, the Council of Europe, NATO, WTO, and CEFTA.

Moreover, country has several beautiful landscapes and other tourist places. Country has some of the beautiful lakes, coastal areas, and picturesque mountain ranges. Hence, in recent times, tourism in Croatia has quite developed. Thousands of tourists from neighbor countries as well as from other part of the world are coming here for their holidays every year.

Croatia is divided into 20 counties and the capital city of Zagreb. This is list of countries in Croatia with their seat, area and population.

Places to Visit in Croatia