The U.S. state of New Mexico is divided into 33 Counties. Explore the New Mexico County Map, all Counties list along with their County Seats in alphabetical order and their population, areas and the date of formation. 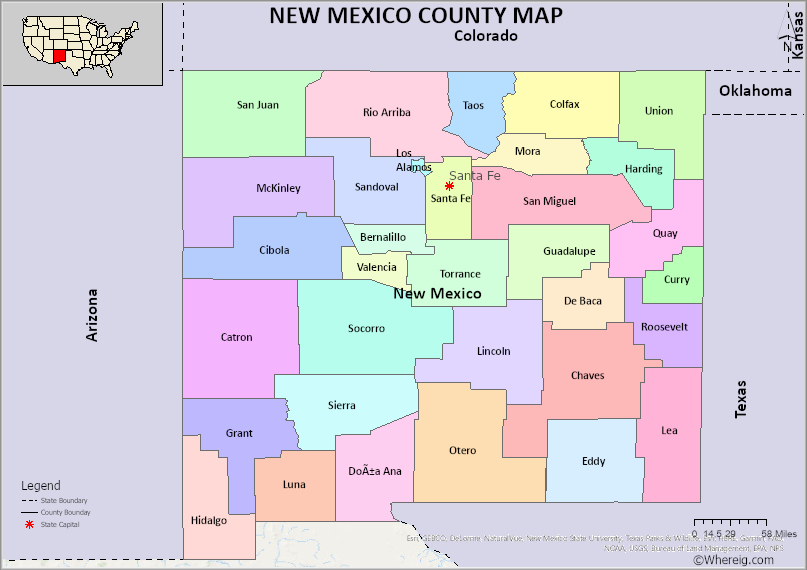 About Counties of New Mexico

New Mexico is one of the states in United States of America that is situated in the South-western region of the country. It is one of the mountain states of the country. New Mexico is the fifth largest state in the country. The total area of the state is 121298 square miles. The state ranks as the 36th state in the aspect of population. The state is bordered by Colorado to the north, Oklahoma and Texas to the east, Mexico in the south and Arizona in the west. The capital of New Mexico is Santa Fe. The state is also known as Land of Enchantment. New Mexico is wonderful and colourful place to visit. One would love to visit New Mexico for its charming and beautiful sceneries, wonderful national park and historical sites. New Mexico has a lot of nick names as it is called with ‘The Cactus State’, The Spanish State’, The Land of Sunshine and so on.

The state of New Mexico follows federal system like all other states of United States. New Mexico state government consists of Executive branch, Legislative branch and judicial branch of the government. The executive branch of the government is led by the governor, lieutenant governor, attorney general, Secretary of state, state auditor, state treasurer and other officials. The local government of Counties in New Mexico comprises of counties and municipalities. Counties are governed by an elected body of five members called County Commission, sheriff, clerk and treasurer. A municipality may consist of village, town or city. All the laws related to municipality are the same for villages, towns or cities.

The U.S. state of New Mexico has 33 Counties. This is list of New Mexico Counties and County Seats in alphabetical order along with check their population, areas and the date of formation.

List of Counties in New Mexico with County Seats