Jesus was born in Bethlehem. Bethlehem is a town in the West Bank region of Palestine, situated on the southern portion in the Judean, Judaean Hills. Bethlehem lies 10 kilometres south of the city of Jerusalem.

Location Map of Birthplace of Jesus 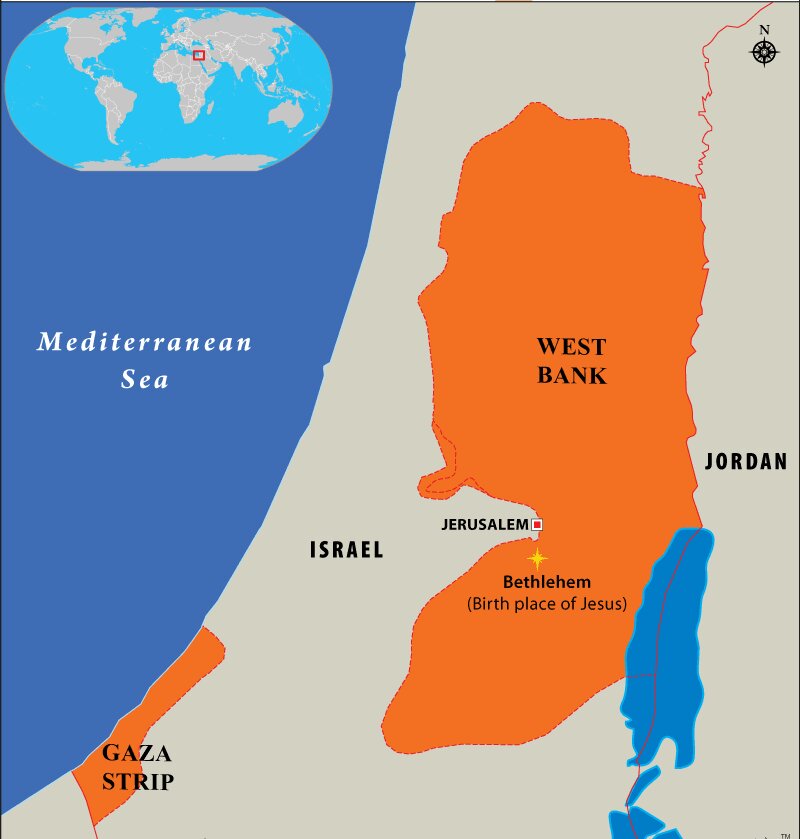 About Map: Map showing location of of Birthplace of Jesus, City of Bethlehem in the West Bank region of Palestine.

Birthplace of Jesus: Church of the Nativity and the Pilgrimage Route, Bethlehem

Jesus was born between 6 and 4 BC. in Bethlehem in Judea. His mother, Mary, was a virgin who was betrothed to Joseph, a carpenter. Bethlehem is located 6.2 mi (10 kilometers) south of the city of Jerusalem, 37 mi (59 kilometers) southeast of Tel Aviv, Israel, 45 mi (73 kilometers) northeast of Gaza City and the Mediterranean Sea and 47 mi (75 kilometers) west of Amman, Jordan. It is now the capital of the Bethlehem Governorate of the State of Palestine. The site also includes Latin, Greek Orthodox, Franciscan and Armenian convents and churches, as well as bell towers, terraced gardens and a pilgrimage route.

Where was Jesus was born in Bethlehem?

According to the Bible, Jesus was born in Bethlehem, which is located in modern-day Palestine. In the biblical gospels of Luke and Matthew, the nativity of Jesus, nativity of Christ, birth of Jesus, or birth of Christ is described. The two narratives concur that Jesus was born in Bethlehem, Judaea, that his mother Mary was engaged to King David's descendant Joseph, who was not his biological father, and that heavenly intervention caused his birth.

The tiny town of Bethlehem is located in the Holy Land's limestone hills, some 6 miles south of Jerusalem. One of the holiest places in all of Christianity is the Church of the Nativity, which marks the traditional site of Jesus' birth and is the oldest church still in continuous use. Approximately 2 million people travel to Jesus' birthplace each year. Christmastime sees a particularly big influx of travelers. Hotels and other accommodations are sold out, and lines are long. Locals make light of the fact that if Joseph and Mary arrived in Bethlehem today, there would still be no room at the inn for them.

Despite its diminutive size, Bethlehem has a significant biblical past. It is referred to as "the city of David" (Luke 2:4) because it was the birthplace of that powerful king of Israel. When Rachel died during delivery, Jacob laid her to rest at Bethlehem (Genesis 35:19, 20). Ruth gathered in the fields of Boaz at Bethlehem (Ruth 1:22; 2:4). Samuel, a prophet, anointed David as Israel's future king there at Bethlehem (1 Samuel 16).

Bethlehem is about 775 meters (2,543 feet) above sea level, which is 30 meters (98 feet) higher than nearby Jerusalem. Bethlehem is located in the Judean Mountains to the south. The city is about 73 kilometers (45 miles) northeast of Gaza City and the Mediterranean Sea, about 75 kilometers (47 miles) west of Amman, Jordan, about 59 kilometers (37 miles) southeast of Tel Aviv, Israel, and about 10 kilometers (6.2 miles) south of Jerusalem. Beit Safafa and Jerusalem are located to the north, Beit Jala to the northwest, Husan to the west, al-Khadr and Artas to the southwest, and Beit Sahour to the east. Beit Jala and the latter are connected to Bethlehem. Within the city limits are the Aida and Azza refugee camps.

Bethlehem is well-known for its handicrafts.

The Church of the Nativity is the location that receives the most visitors.

The traditional resting place for Rachel is Bethlehem.