Maryland County Map, List of Counties in Maryland with Seats

The U.S. state of Maryland is divided into 24 Counties. Explore the Maryland County Map, all Counties list along with their County Seats in alphabetical order and their population, areas and the date of formation. 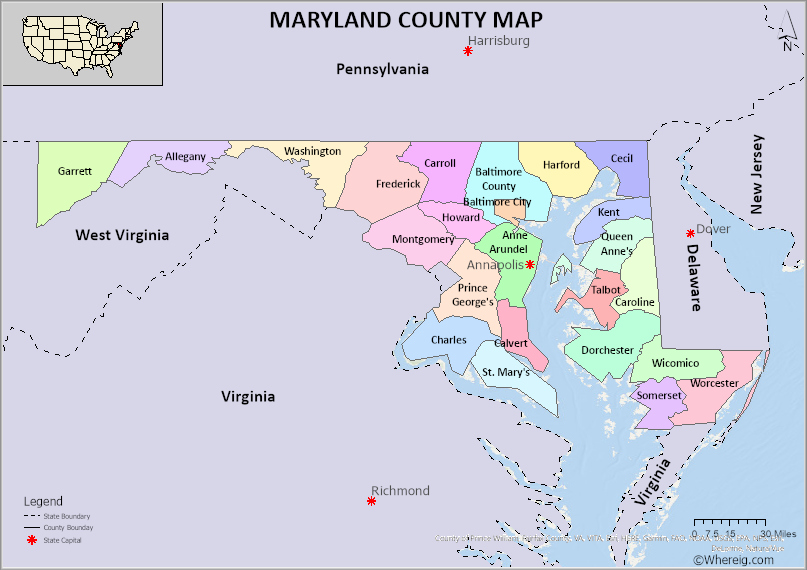 About Counties of Maryland

Maryland is one of the states of US which is situated mid-Atlantic region of the country. The state is bordered with four states in different directions Pennsylvania to the north, Delaware to the east Virginia to the south, West Virginia to the west. Maryland is spread over 9707 square miles which would account for 25142 square kilometres. The capital city of Maryland is Annapolis. The state is blessed with nick name as ‘the old Line State and the Free State ’. The state in fact the home to the Chesapeake Bay, Maryland is famous for its blue crabs. Maryland has a very popular historic trading port at Baltimore. The state is called also as America in Miniature. Maryland Counties are twenty three in number and it has one Independent City. Maryland`s the largest County is Frederick and second biggest county is Garrett. The smallest county in Maryland is Calvert County. Montgomery County is the most populous county in the state. The least populous County is Kent in the state of Maryland. Maryland consists of 157 cities, towns and villages in the state. There are 154 Municipalities which are in Maryland Counties. Among all the cities of the state Baltimore is considered as independent city by state`s Constitution of Maryland now it is in fact the largest city in the state.

The state Maryland and its Counties are abide by the constitution of the state. The political power of Maryland is divided among the three branches of the Government. They are executive, legislative and judicial. The executive branch consists of the Governor, his cabinet and a number of departments.

The U.S. state of Maryland has 24 Counties. This is list of Maryland Counties and County Seats in alphabetical order along with check their population, areas and the date of formation.