Where is USA in World Map? - Where is US Located?

The United States is located on the North American Continent, It is bordered by the Pacific Ocean, the Atlantic Ocean, Canada to the north, and Mexico to the south. 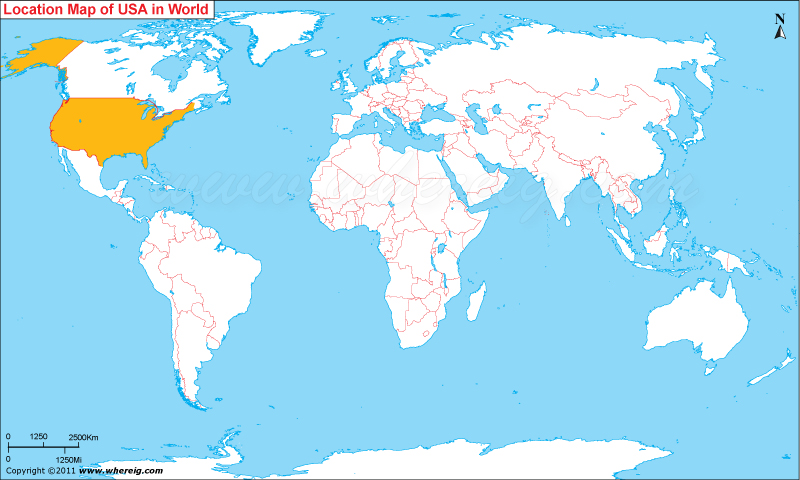 Where is United States of America (USA) Located?

Can you find out where is USA in the World Map provided on this page?

The United States of America, also referred to as the United States or America, is a transcontinental nation, which is situated in North America. The northern and southern land boundaries of the United States are shared with Canada and Mexico, respectively. Along with other countries, it shares maritime boundaries with the Bahamas, Cuba, and Russia. It ranks as the third most populated nation in the world with a population of over 331 million. The most populous metropolis and financial hub is New York City, while Washington, D.C., serves as the nation's capital.

There are 50 states in the USA, along with a federal district, 326 Indian reservations, five significant unincorporated territories, and nine minor offshore islands. The Thirteen British Colonies were created along the East Coast and later became the United States after disagreements with the British Crown about taxes and political representation sparked the American Revolution (1765–1784), which declared the country's independence. The United States started to grow across North America in the late 18th century, steadily acquiring new territories.

The United States is a highly developed nation with the greatest GDP in the world at current market exchange rates, accounting for around one-fourth of the world's GDP. The United States is the second-biggest exporter and the world's largest importer by value. As a federal republic, the United States has three distinct branches of government, including a bicameral legislature. It has a liberal democracy and a market economy, and it places highly on worldwide scales for economic competitiveness, education, income and wealth, and human rights. In addition to being a permanent member of the UN Security Council, the United States is a founding member of the World Bank, International Monetary Fund, Organization of American States, and NATO. The nation accounts for more than a third of worldwide military expenditures, is the world's top military power, and is a major player in politics, culture, and science.

Readers who have landed on this page can locate where the USA is in the World Map easily as we have coloured it.