Where is Tampa, FL?

Location of Tampa on a Map 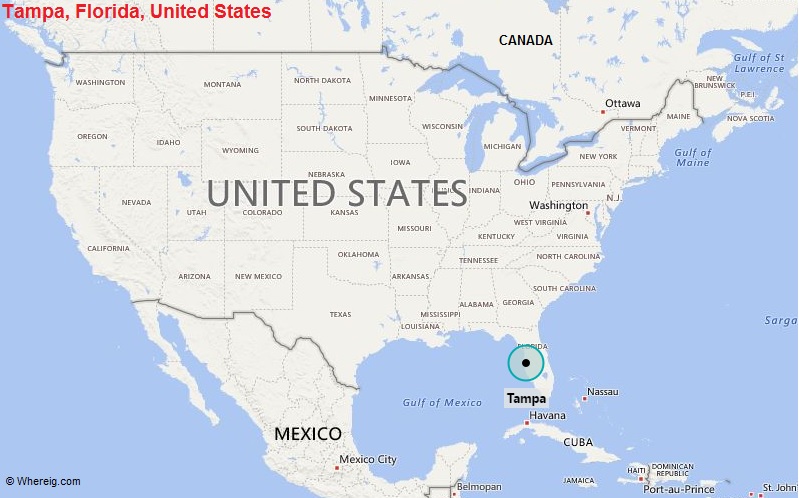 About Map: Map showing the Location of Tampa, Florida in the US.

Where is Tampa Located?

Tampa is a major city and the county seat of, Hillsborough County in Florida, United States. It is located on the west coast of Florida on Tampa Bay, near the Gulf of Mexico.>

Tampa is a city located in the U.S. state of Florida on the Tampa Bay along with Gulf Coast. The north shore of Tampa Bay and the east shore of Old Tampa Bay form the city's boundaries. Tampa city is in fact the biggest city in the Tampa Bay. In terms of population, Tampa City is the third most populous city in Florida with the population of 384,959 as per 2020 census. It is fifty second most populated city in the United States. The area of Tampa is 455.4 km2. Tampa city is known as "The Big Guava." Steve Otto, a seasoned newspaper writer for the Tampa Tribune and Tampa Times, first used it in the 1970s.

Tampa City is renowned for its thriving Ybor City, enormous Florida Aquarium, heart-pounding Busch Gardens, and for being the birthplace of the Cuban sandwich. Tampa is distinguished for its beautiful parks, cigar manufacturing, modern museums, high-end restaurants, and lovely sidewalks. The warm weather helps to bring fresh fruit and vegetables throughout the year, and cultural influences comprise Cuban, Spanish, and Italian, with a splash of Southern, Mexican, and Asian thrown in for good measure.

Splendid tourist attractions can be found in Tampa, particularly Busch Gardens, which offers families the excitement of an amusement park and the fun of a zoo all in one location. Some of the tourist attractions of Tampa City are Busch Gardens, Florida Aquarium, Zoo Tampa, Ybor City, Tampa River walk, Museum of Science and Industry, Dining in Tampa, Sparkman Wharf, Glazer Children`s Museum, Tampa Bay History Centre.

[an error occurred while processing this directive]