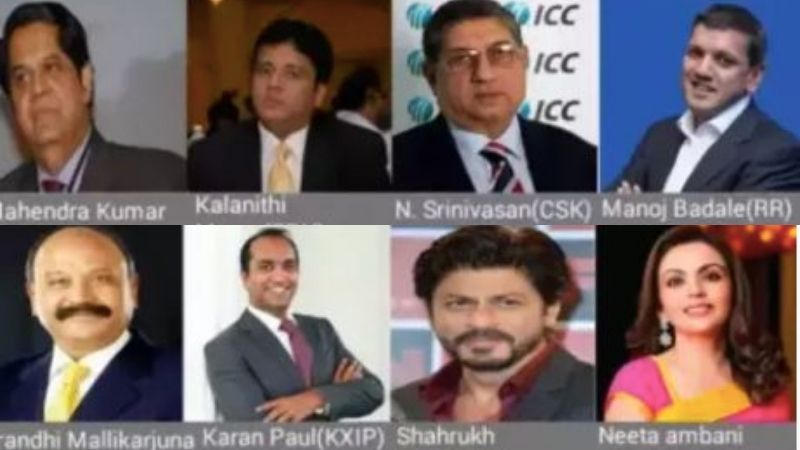 IPL is legitimately acknowledged with revolutionising the sport in the nation. The IPL is unquestionably the largest cricket league in the world. The league has a large fan base not just in India but all across the world. For cricket lovers, the event is really a carnival. The league strikes the ideal blend between glitz, extravaganzas, and sports. The IPL has changed the game on a worldwide platform. IPL Team Owners are famous celebrities and highly south after individuals. The IPL team owners are listed here.

Previous 8 teams in the IPL tournament

Chennai Super Kings is the most popular team among the others. Under the captaincy of Mahendra Singh Dhoni, the team has won the championship three times: in 2010, 2011, and 2018. CSK has the tournament's highest winning percentage. It is also the only team to have appeared in every playoff game except 2020. CSK also has the highest number of final appearances. The team, along with the Rajasthan Royals, was banned for two years following the spot-fixing scandal. This franchise is owned by N Srinivasan, the CEO of India Cements and a former ICC Chairman.

The most prosperous franchise in the competition is Mumbai Indians. It holds a record-breaking five titles and has recently seen great success in the IPL, winning three of the previous four championships. The team is owned by Reliance, the largest corporation in India. The team's only owner is Mukesh Ambani. It should come as no surprise that the team owner is also the second wealthiest owner of a sports team in the world, behind only Steve Balmer, owner of the NBA's Los Angeles Clippers.

Preity Zinta and Ness Wadia of the Wadia group own the team, Kings XI Punjab. Mohit Burman and Karan Paul also share ownership of the team, although Preity Zinta is its flag bearer. The vivacious Bollywood starlet has enjoyed a beautiful and fruitful career in the cinematic business. She attends every game regularly and gives the squad morale by being there. Preity can be seen waving the team flag from the crowd whenever the team plays. The owners of the Punjab Kings are extremely enthusiastic about their team. The owners considered it a privilege to attend every game of the squad. The Kings XI Punjab team is always inspired and supported by the franchise's owners.

The GMR group and the JSW group own an equal stake in Delhi Capitals. Delhi Capitals, the IPL's runner-up in the 2020 season, has been the team to anticipate in this season. The team had its greatest performance in the 13th edition, and DC went on to participate in their first-ever finals this year. Initially the team was named as Delhi Daredevils, which was changed two years ago after JSW Company purchased a 50% stake in the franchise. The youngest franchise owner is Parth Jindal, and GMR and Parth Jindal each own an equal ownership.

Rajasthan Royals, a Jaipur-based franchise, is one of the most talked about the franchise. Rajasthan Royals the IPL team known as the "Money ball team" won the league's first season in 2008. The team has given the other teams a tough time despite not having won a championship since 2008. Manoj Badale is the owner of the team called Rajasthan Royals.

United Spirits Limited will own Royal Challengers Bangalore in 2022. The United Spirits Limited is the largest alcohol producer in India and ranks second globally in terms of volume. Bangalore, Karnataka, is home to its headquarters. The current chairperson of USL is Mahendra Kumar Sharma, and the company's managing director and CEO is Anand Kripalu.

The West Bengal team, KKR, has a successful history in the league. The team is based in the city of Kolkata. Under the leadership of Gautam Gambhir, the team has won the championship twice, in 2012 and 2014. Red Chillies Entertainment and the Mehta group jointly own the team and the Red Chillies holding a significant percentage. The team has always delighted in popularity, and with Bollywood icon Shah Rukh Khan, nothing less is to be expected.

An Indian franchise cricket team called the Gujarat Titans is based in Ahmedabad, Gujarat. The team is led by Hardik Pandya and coached by Ashish Nehra, and is owned by CVC Capital Partners. The Gujarat Titans, who won their first championship in the 2022 season, are the current IPL champions.

The Lucknow Franchise has just been established for the 15th IPL 2022 season. The RPSG Group, owned by Sanjiv Goenka, purchased the Franchise. Sanjeev Goenka was a significant industrialist in the nation in the past now he is the owner of Lucknow Super Giants tea.