Kentucky is a state situated in the east central US. Nicknamed as the "Bluegrass State", Kentucky is the 26th most populous state of the 50 U.S. states. The state of Kentucky is one of the four U.S. states constituted as a commonwealth (others being Virginia, Pennsylvania, and Massachusetts). Kentucky is bordered by West Virginia, Virginia, Tennessee, Illinois, Indiana, Ohio and Missouri.

At least 26 people are dead and a lot are not identified after floods that were heavy caused massive flooding in the region of Eastern Kentucky and surrounding Appalachian communities. More rainfall threatens eastern Kentucky on Sunday, at least 12 counties, along with two cities in Kentucky have declared their own states of emergency. 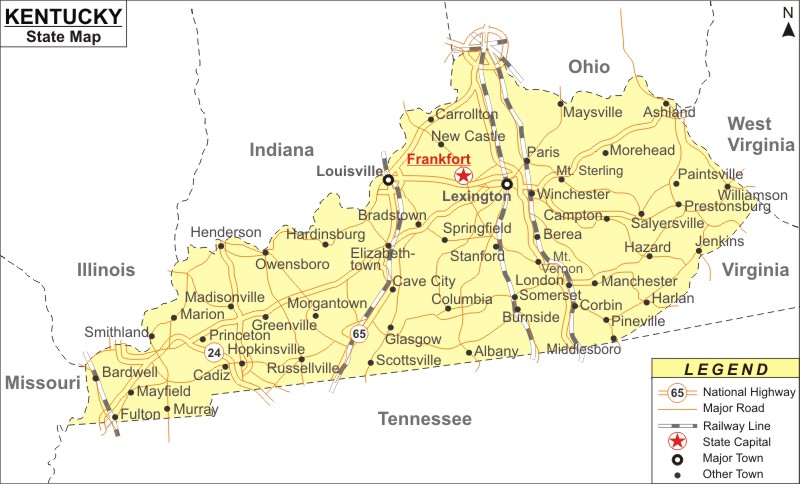 Kentucky State Map provides an illustrative description of the entire state, sections include: geographical locations, railways, rivers, counties, national parks, county seats, museums, golf courses, and roadways. This state map of Kentucky locates the state as bordered by West Virginia, Virginia, Tennessee, Missouri, Illinois, Indiana and Ohio. It shows inter-state and state highways, railway lines and state boundaries besides showing the state capital Frankfort, major towns and other towns.
According to the census data of July 2019, Kentucky has a population of 4,467,673 people. Kentucky is politically sub divided into 120 counties with county seats acting as the administrative headquarters of the counties.
Kentucky is situated on the eastern front of South Central United States and covers a total area of 39,728 sq mi. The transportation system of Kentucky includes railways with 2,961 miles of tracks and 79,266 miles of roadways.

The land was primariliy inhabited by Native American tribes from 1000 BC to 1650 AD. European contact to the land occured in the mid-eighteenth century, by which time the Native American population was greatly diminished. Though originally part of the state of Virginia, Kentucky came to acheive full and separate statehood in 1792. The area known as Central Kentucky in the nineteenth century was a major slaveholding region. During the American Civil War, Kentucky was considered one of the "border states."

The state of Kentucky is part of the east south-central region of the U.S. Eastern Kentucky lies in the Applachian mountain ranges. The north of the state is bound by the Ohio river while the southern part of the state is similarly enclosed by the Mississippi river.
Kentucky is best divided into five separate regions geographically. These are the Cumberland plateau, the Bluegrass region, the PennyRoyal plateau, the Western Coal fields and finally the Jackson purchase. Kentucky has a humid subtropical climate.

Frankfort is the capital of Kentucky. Louisville, Glasgow, Cave City, and Columbia are some of the other prominent cities.

Considered a part of the American South in terms of culture, Kentucky is famous in particular as a tourist destination for its beautiful lakes. Horse racing is another attraction in Kentucky. The Kentucky Fried Chicken as well as the musical traditions of bluegrass also add to the cultural dimension of the place.
Tourist hotspots include Mammoth Cave National Park, Newport Aquarium, Keeneland, Louisville Zoo, Nationl Corvette Museum, Cumberland Gap, Abraham Lincoln Birthplace National Historic Park and much more.

Kentucky is well connected by a good network of roads and railways. Interstates 65, 71, and 75 connect the northern and southern parts of Kentucky. The eastern end of the state is connected to the western end by Interstates 24 and 64.

US Highways and State Routes in Kentucky