Map of Maine - ME Map

In terms of area, Maine is the 39th biggest state in the U.S. The state of Maine is famous for its exotic seafood, scenic landscapes, mountains, dense jungles, and stony shoreline. The capital of ME is Augusta and largest city is Portland. Maine hotels are tailored for business and leisure tourists. The main airport of ME is Portland International Jetport. 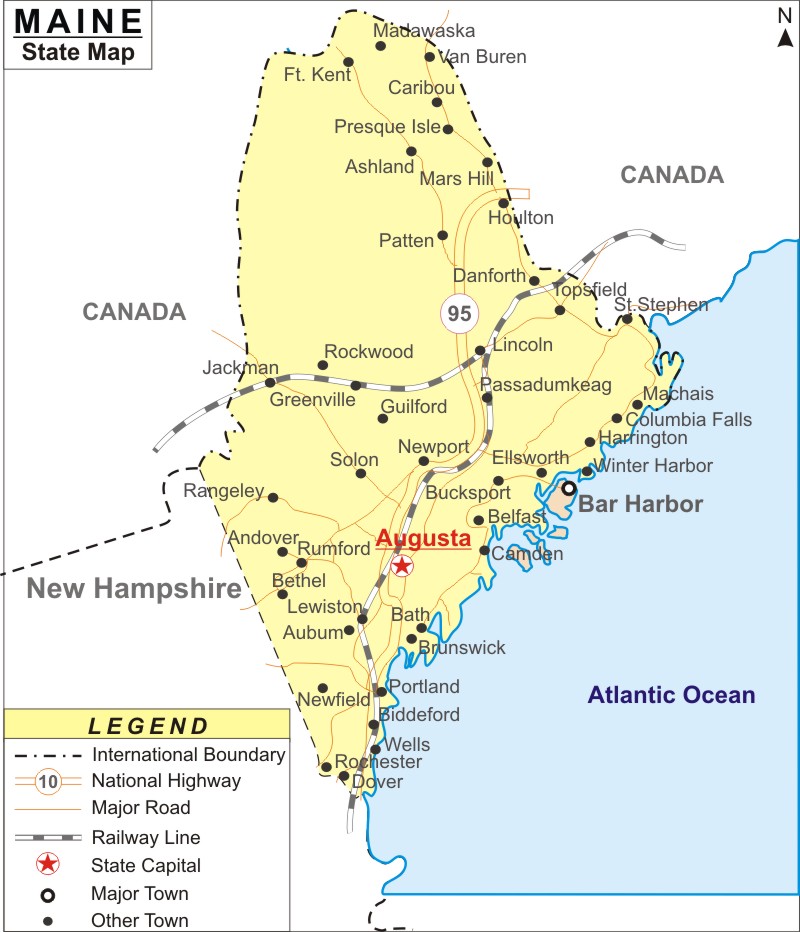 Maine, the 23rd state of the United States, creates a part of the northeastern segment of the country. Its picturesque landscapes, exotic seafood, dense jungles, mountains, and stony shoreline make it a traveler's paradise. The hilly state covers a total area of 35,385 sq miles and shares its borders with New Brunswick and Quebec (Canada), the Atlantic Ocean, and New Hampshire.

A Maine Map will help you move around in the state and locate every important tourist attraction for which the state is famous. The capital of Maine is Augusta and the largest city is Portland.

The Maine Map clearly defines the geographical and political contours of the state. The State of Maine is located in the northeastern part of the United States of America. Maine is surrounded by Canada on its northern border, by New Hampshire on its western and southern border and by the Atlantic Ocean on its eastern border.

Richardson Lake and Moosehead Lake are the prominent lakes of Maine. The geographical divisions of the mountains, piedmont, uplands and coastal lowlands characterize the heterogeneous topography of the state. The map of Maine indicates the important cities of the state.

Augusta is the capital of the State of Maine. Caribou, Bangor, Lewiston, Kennebunk, Cape Elizabeth and South Berwick are some of the prominent cities of Maine. The Maine State Map points out the exact geographical location of the state.