Arkansas County Map, List of Counties in Arkansas and Seats

The U.S. state of Arkansas is divided into 75 counties. Explore the Arkansas County Map, list of Counties in Arkansas along with their County Seats in alphabetical order along with their population, areas and the date of formation. 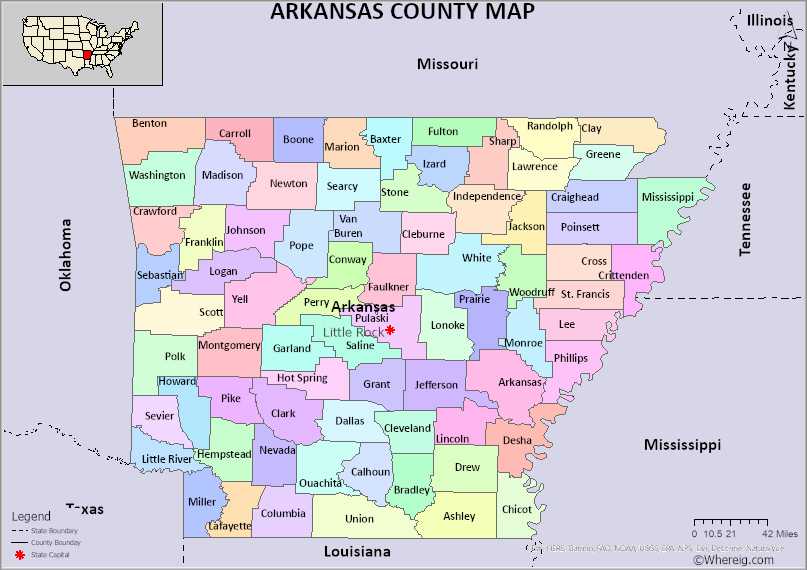 One of the states of U.S.A namely Arkansas has a wonderful nick name and it is called as Natural state because it has got beautiful lakes, rivers mountains and wildlife. Arkansas is located in South Central part of United States. The capital of state is Little Rock. The state shares the border with other six states, Missouri is located to the north of the state, while Louisiana is in to the south, Texas which is also known as Lone star state is towards southwest and Oklahoma in the west and Tennessee and Mississippi are to the east. The number of Counties in Arkansas is 75. Among all counties of Arkansas, Union County is the biggest county by area while Calhoun is the smallest county.

Arkansas has got 52035 square meter area and 134771 square kilometres. According to official census taken back in the year 2010 the population was 2,915,918 in Arkansas state that awarded the state as the 32nd largest state in the U.S.A The estimated population of state now is 3,033,946. Pulaski county indeed ranks first in terms of most populated county in the state. Less density of population could be found in Calhoun County. The counties in Arkansas follow Federal government at the centre and the political power in the state is divided into three branches, they are legislative, executive and judiciary.

The U.S. state of Arkansas has 75 counties. This is list of Arkansas Counties and County Seats in alphabetical order and check their population, areas and the date of formation.