Tennessee County Map, List of Counties in Tennessee with Seats

The U.S. state of Tennessee is divided into 95 Counties. Explore the Tennessee County Map, all Counties list along with their County Seats in alphabetical order and their population, areas and the date of formation. 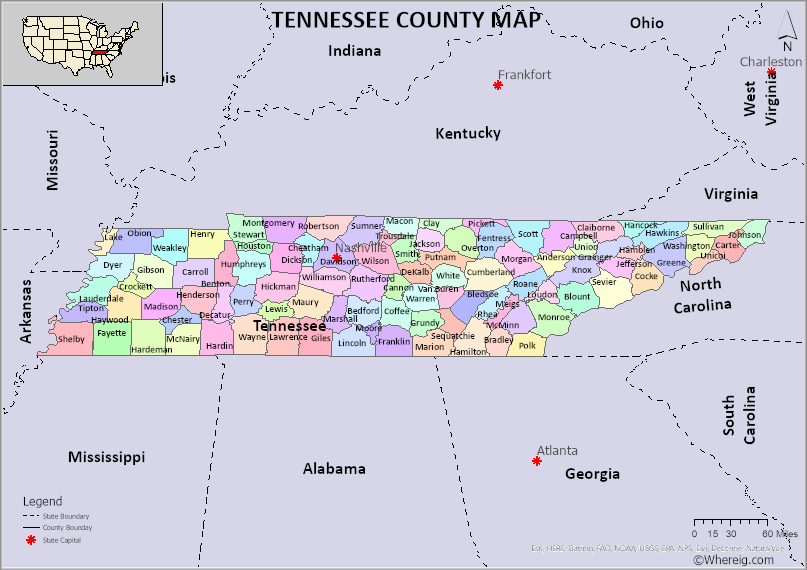 About Counties of Tennessee

Tennessee is one of the fifty- states of United States which is located in South-eastern part of the country. U.S state of Tennessee shares the borders with Kentucky in the north, North Carolina in the east, Georgia, Alabama and Mississippi in the south and Missouri in the northwest. The state is the thirty sixth biggest state in its size. The state occupies 42,143 square miles in the total area of the country. Tennessee ranks as the sixteenth most populous state in the country. The estimated population of the state is 6.95 million. U.S State of Tennessee joined in the year 1796 and became 16th state of the Union. The capital of Tennessee is Nashville which is the largest city in the state. The state is also known as Volunteer state as it had sent 1500 members of the army to the war of 1812.

There are 346 municipalities in the state which consists of cities and towns of the state. Among the counties of Tennessee Shelby County has the highest number of population with 929,744 citizens. The least populated county in the state is Pickett County. Not only having maximum number of population Shelby is the biggest county by area. The tinniest county in terms of geographical area is Trousdale County. Of all the counties of Tennessee the wealthiest counties are Williamson, Wilson, Davidson and Knox. The poorest city in the state of Tennessee is Morristown. The biggest cities and towns of the state are Nashville, Memphis, Knoxville, Chattanooga and Clarksville.

The U.S. state of Tennessee has 95 Counties. This is list of Tennessee Counties and County Seats in alphabetical order along with check their population, areas and the date of formation.

[an error occurred while processing this directive]
County Map of U.S. 50 States
Edited by: Vijay Kanth | Updated on: June 13, 2022