Illinois County Map, List of Counties in Illinois and Seats

The U.S. state of Illinois is divided into 102 Counties. Explore the Illinois County Map, all Counties list along with their County Seats in alphabetical order and their population, areas and the date of formation. 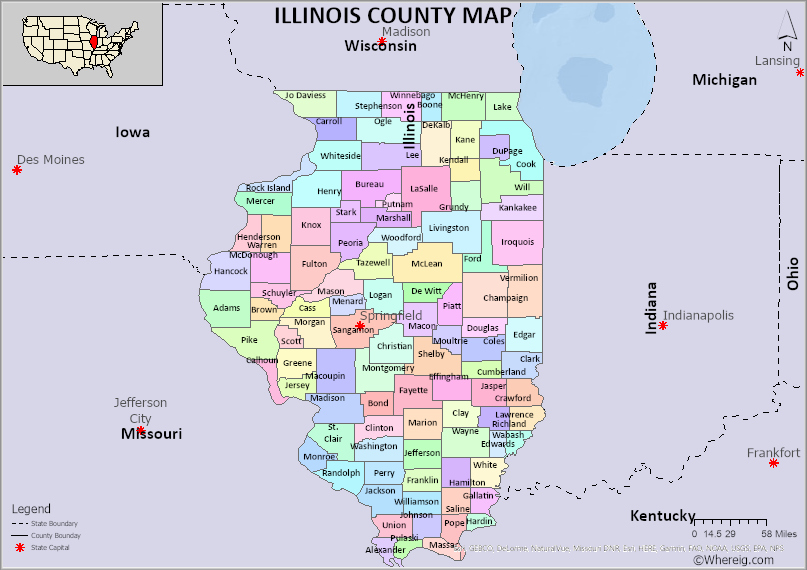 About Counties of Illinois

Illinois is a state of United States which is located in the Midwestern region of the county. The state ranks as the largest state in terms of population. The state occupies an arena of 55519 square miles that accounts for 143793 square kilometers in the country. The capital city of the state is Springfield. The state Illinois is surrounded with other states namely Wisconsin is located to the north of the state where as Iowa and Missouri to the west, Kentucky to the east and south, and Indiana to the east. The state is blessed with many natural resources like coal, timber, petroleum and fertile soil. Illinois is nicknamed as ‘The Prairie State’. The state has another nick name too ‘Land of Lincoln’.

The state takes privilege of having big cities. The prominent cities of the state are Chicago, Aurora, Rockford and Springfield. Chicago is the largest city in the state of Illinois which is most populated city with 2,679,080 million citizens. Aurora and Naperville stood as second and third largest cities of the state in terms of population. Pingree Grove has been considered as the fastest growing city in the state.

There are 102 counties in the state of Illinois. Cook County in fact is the biggest county regarding population and the smallest county in terms of population is Hardin County. Geographically the biggest County is McLean County and Putnam County is the smallest. According the constitution of Illinois the state government entitled to have three branches of administration; they are executive branch, legislative branch and Judicial branch. As per home rule county is governed by a body of Commissioners. The Commissioners and the president of a County Board are usually elected.

The U.S. state of Illinois has 102 Counties. This is list of Illinois Counties and County Seats in alphabetical order along with check their population, areas and the date of formation.