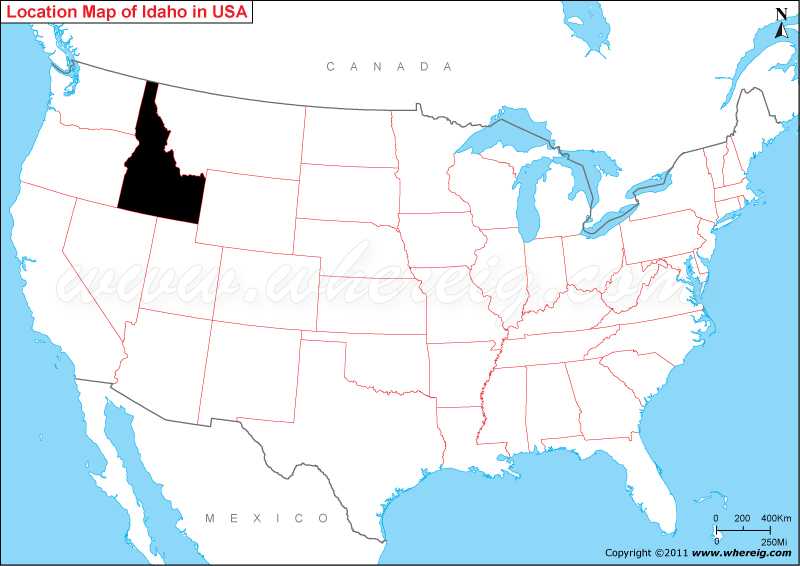 About Map: Map showing location of Idaho in the United States.

Where is Idaho State Located?

As shown in the Idaho location map that Idaho is located in the north-west region of the US. Idaho US is the 43rd state admitted in the year 1890. The state shares boundary with Washington in the north-west, Oregon in the west, in the south two states share their boundaries i.e. NevadaNevada and Utah, and in the eastern side Wyoming and Montana and Washington and Oregon to the west. share their boundaries with Idaho. However, as you can clearly visualize on the Idaho state map that its thin and pointed strip of northern part shares international boundary with Canada.

Likewise, the state has landlocked position with two major rivers i.e. Columbia River, and Snake River that supply sufficient water to the Idaho state US. There is very much interesting fact about the state i.e. it has been nicknamed as the Gem State because of almost every known gem has been found here. Surprisingly, Idaho state is one of two places in the entire world where star garnets found; the other place is Himalaya Mountains in Asia. In addition, it is the only place in the world where six pointed star garnets have been found.

The state has many places of attractions where tourists enjoy a lot; the state has several national parks, museums, monuments, and historic sites. However, the given map of Idaho state is very helpful for all purposes because it is detailed Idaho map. On the Idaho map US, you can see the all major cities including the capital city Boise, highways, railways, and other smaller towns.