Where is Kansas (KS)? 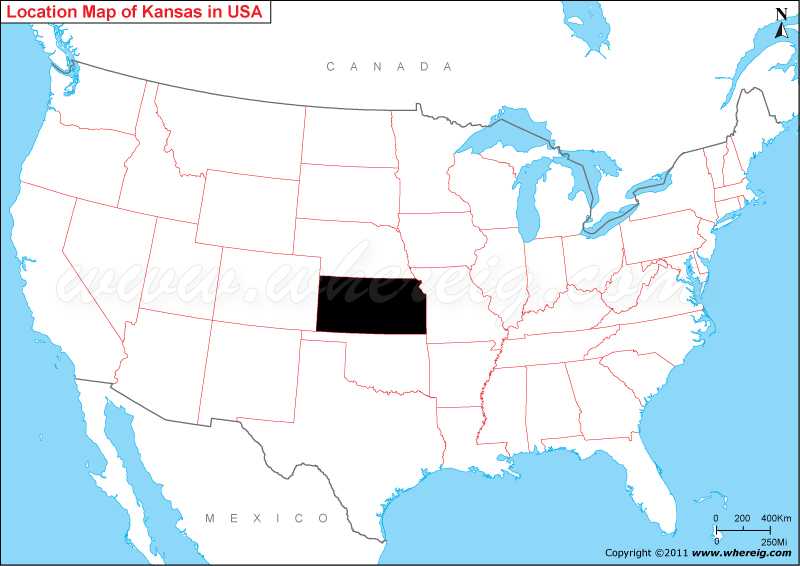 About Map: Map showing location of Kansas in the US Map.

Where is Kansas Located?

Kansas is a landlocked state of the US. As shown in the Kansas location map that Kansas is located in the Midwestern region of the United States. As clearly illustrated on the given map of Kansas US, it is bordered by Missouri on the east, Nebraska on the north, MissouriColorado on the west, and Oklahoma on the south. The Kansas US is divided into 105 counties and 628 cities. The interesting fact about the state is – it is located at equidistance from the Atlantic and Pacific Oceans. Its capital is Topeka and its largest city is Wichita.

The name Kansas is quite interesting because there are a few stories behind the naming of the state; however, the most accepted fact is – it is named Kansas because of the Kansas River that flows through Kansas state US. The climate of the state is pretty variable and not similar in entire state. The most important types of climates are humid continental, semi-arid steppe, and humid subtropical.

As you can see on the Kansas map US that the state has many places of attractions that attract tourists most, for example Brown V. Board of Education National Historic Site (Topeka), Fort Larned National Historic Site in Larned, Front Street and Boot Hill Museum are located in Dodge City and many others. The given Kansa state map has all major cities and significant towns among them the most beautiful and largest city is Wichita; however, the capital city is Topeka. Other important cities are Kansas City, Overland Park, Olathe, and Lawrence. Moreover, the given detailed map of Kansas will help you to find the locations of cities and also gives you route guide.