China is a country, located in East Asia and lies between latitudes 35.0° North and longitudes 103.00° East. It is the world's most populous country, with a population of around 1,439,323,776 in 2020 at mid year according to UN data and world's third largest country in terms of area. 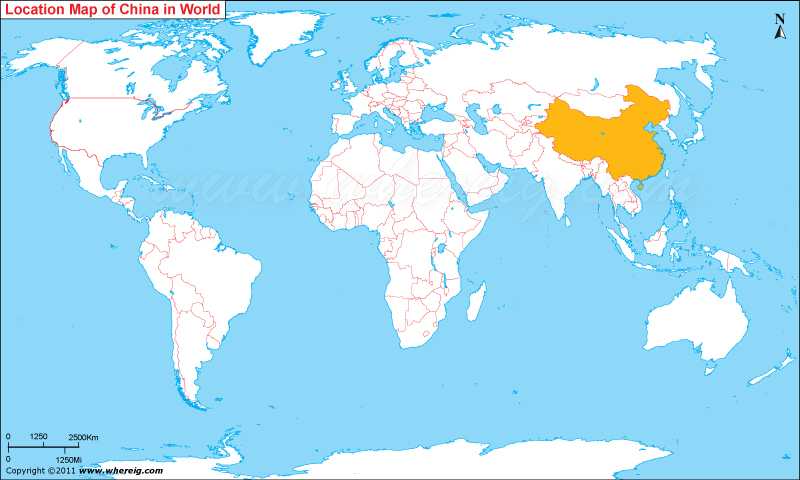 About Map: Map showing location of China in the world Map.

Where is China Located?

The given China location map shows that China is located in the eastern part of Asia. China map also shows that the huge territory of People's Republic of China or simply China shares its international boundaries with several countries including Kazakhstan, Kyrgyzstan, Tajikistan, Afghanistan, and Pakistan to the west; India, Nepal, and Bhutan to the southwest; Myanmar, Laos, and Vietnam to the south; North Korea to the southeast, Mongolia to the north; Russia to the northeast and northwest respectively. Besides, the water bodies that lie in the eastern side are Yellow Sea and East China Sea, and South China Sea in the south.

China is the most populous country of the world and third largest country in terms of area. China constituted of 22 provinces, five autonomous regions, and four directly administered municipalities. Besides, country has two autonomous special administrative regions (SARs) i.e. Hong Kong and Macau.

The government type of China is Communist. But in the recent years, the several liberal policies sometimes keep it in between the Communist and Socialist State. China is one among the five permanent members of the United Nations Security Council. Besides, it is also a member of the WTO, BRIC, APEC, Shanghai Cooperation Organization, and G-20. Above all, China is a recognized nuclear weapons State, which has the world's largest standing army along with the second-largest defense budget.

The geographic area of the huge country is quite diverse, ranging from forest, steppe grassland, to deserts (the Gobi and Taklamakan). Besides, the terrain in the west is rugged and elevated; the Himalayas and the Tian Shan mountain ranges make China's natural boundaries with India, Nepal and Central Asia.

Immediately after the adopting the market-based economic policy in the year 1978, China has become one of the world's fastest growing economy. At present, China's economy stands second only after USA in terms of Purchasing Power Parity as well as GDP. Moreover, China is very rich in terms of economic resources and agricultural produce.