Germany is a country located in western and central part of Europe, and is bordered by nine countries: Denmark, Poland, Czech Republic, Austria, Switzerland, France, Luxembourg, Belgium, and the Netherlands. 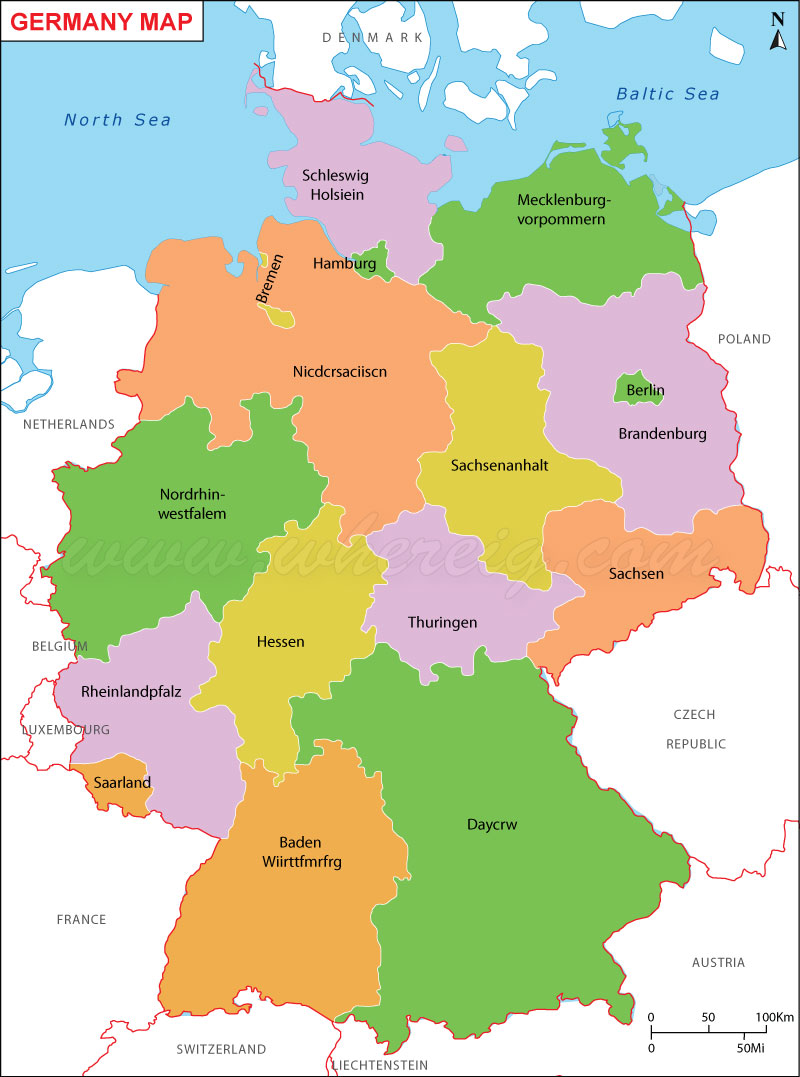 Officially known as the Federal Republic of Germany. Germany is the seventh largest country in Europe by area, located in the western and central part of Europe, and is bordered by nine countries: Denmark, Poland, Czech Republic, Austria, Switzerland, France, Luxembourg, Belgium, and the Netherlands. The important cities of Germany are Berlin, Frankfurt, Nurnberg, Stuttgart, Hanover, Hamburg, Bremen, and Dusseldorf.

The Germany Political Map represents the international boundaries of the nation along with internal political divisions in the form of all the 16 states. The country capital and the respective state capitals are also shown in the political map of Germany. Germany political map also displays some of the major cities of the country.

The Federal Republic of Germany in Europe covers an area of about 357,022 km2 (137,847 sq mi) and is home to a population of about 83,190,556 people as of 2020 estimate. Germany is one of the major European nations going by economic soundness, technological advancement, military might, and political clout.

Berlin is the capital of Germany and the country's largest city as well. Apart from Berlin, Hamburg, Munich, and Cologne are the largest cities of Germany. Over 74% of the German population lives in urban areas.

The earliest settlements of the Germanic tribes date back to the second century BC. Sporadic attempts at establishing an empire were made by Charlemagne and Otto I but these were short-lived. A number of fiefdoms dominated the land till the nineteenth century when the land was unified by Otto von Bismarck who founded the German Empire.

The Triple Alliance between Germany, Austria-Hungary, and Italy defined the country's involvement in World War I. Germany, Austria-Hungary and the Ottoman Empire went up against the Allied Forces - Great Britain, France, Russia, and the United States of America. The humiliating defeat after a prolonged war and the reparations paid by Germany following the Treaty of Versailles stripped the nation of its economic and political resources.

The rise of Adolf Hitler and the ensuing Holocaust resulted in outbreak of World War II. Hitler's conquest of Poland in 1939 led the nation into a conflict with Britain, USSR, and USA. Italy and Japan sided with Germany and most of the nations of the world got drawn into the only war with a recorded nuclear history. By 1945 Germany had been left completely ravaged by the defeat. East and West Germany formed two separate states in 1949 with a wide social and economic divide. By 1990 the reunification of the two states was facilitated by the tearing down of the Berlin Wall and by the call for a consolidated Germanic nation. The unified republic prospered and went to become a major power of the world.

The German economy is the fifth largest in the world and the country tops the list of exporters across the globe. At a GDP - PPP of about US $4.743 trillion (5th) as of 2021 estimate, the country's multi-national enterprises have made a mark all over the world. Over 500 of the largest global corporations are headquartered in Germany. Research and development and technology are Germany's mainstays. Despite the global economic recession, the German economy has retained its AAA, the highest rating by Standard and Poor. With a labor force of over 43.59 million, Germany is known for its highly industrialized economy. Potatoes, barley, and fruits are the main agricultural crops and vehicles, machinery, food, and textiles top the list of German exports.

Travel and Tourism in Germany

It is perhaps the intriguing history of the land, perhaps the natural rugged beauty, or perhaps the industrial development and technological advances - Germany is among the preferred tourist destinations of the world. In 2018 alone a record 185.1 million tourist headed to Germany. Lufthansa, the German airline, has one of the best fleets in the world and Frankfurt is among the top five busiest airports in the world.

Berlin, Munich, Hamburg, Frankfurt, Cologne, Dusseldorf, and Stuttgart are the most popular tourist destinations in the country. From the rugged Alps to rolling plains and from thicketed forests to coastal areas Germany offers a choice of landforms for the visitors to explore. The spa resorts at Baden-Baden, Wiesbaden, and Bad Dürkheim and the national parks of Western Pomerania, Bavarian Forest, and Jasmund are popular with adventure enthusiasts and nature lovers respectively. The Europa Park of Rust, the Nurburgring Park, and the Movie Park of Bottrop are ideal for family vacations.

A number of popular tourist routes have been popular attractions with visitors in recent years - the German Wine Road the Castle Road, the Black forest Route, and the Romanesque Road together offering an exciting variety of options to explore the country.

Language, books, and publication have been the three pillars of Germanic culture and society. Some of the most renowned western philosophers of all times - Immanuel Kant and Georg Wilhelm Friedrich Hegel - were of German origin. With his Critique of Pure Reason, Kant took on the renowned champions of skepticism including Descartes, Berkeley, and Hume. Hegel's Absolute Idealism was a revolutionary philosophy and is believed to have given way to Marxism. Gottfried Leibniz's rationalism and Friedrich Nietzsche's existentialism form the core of western philosophical thought.

German musicians such as Bach, Mendelssohn, Beethoven, and Bramhs are the masters of Western Classical music. Contemporaty German jazz and pop are popular all over the world. The tradition of festivals, fairs, and carnivals remains unbroken in modern-day Germany. The Frankfurt Book Fair is a global event awaited by publishers, authors, and booklovers. The country boasts of over 7,500 public and private libraries and an average of 95,000 publications are issued here every year. The castles and cathedrals of Germany testify to the architectural evolution that transformed Germany. Gothic, Baroque, and Renaissance masterpieces dot the country and the country is home to over thirty-two UNESCO World Heritage Sites.

Germany is a colorful land of natural beauty and many carnivals. Beneath the gaiety is a robust economic foundation and entrepreneurial success. The German brands that have become known for their excellence and high quality standards include Lufthansa, BMW, Mercedes-Benz, Porsche, Audi, Volkswagen, Adidas, Nivea, T-Mobile, and SAP.