Utah County Map, List of Counties in Utah with Seats

The U.S. state of Utah is divided into 29 Counties. Explore the Utah County Map, all Counties list along with their County Seats in alphabetical order and their population, areas and the date of formation. 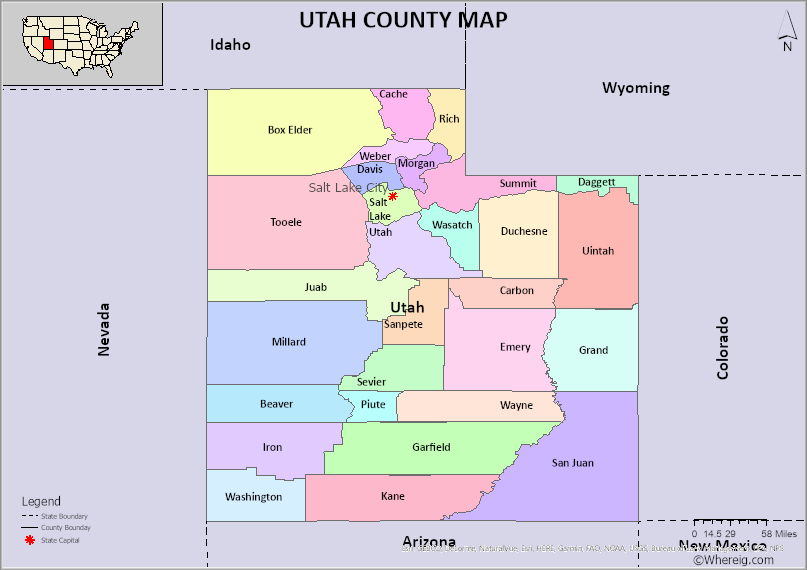 About Counties of Utah

Utah is one of the states of United States which is situated in the western part of the country. The state shares the borders with Colorado in the east, Wyoming in the northeast, Idaho in the north, Arizona in the south and Nevada in the west. U.S State of Utah is the 13 biggest state geographically. The capital city of the state is Salt Lake City. It is the thirtieth populous state in the country.

There are 29 counties in the state of Utah. In the beginning there were only 7 counties in the year 1849 when it was under the provisional State of Deseret. Utah Counties have the opportunity to select one of four types of county government. Counties of Utah got this golden chance because it was given in the constitution of the state. Utah Counties can opt for a three member full time commission or expanded commission which has got 5 members or a part time council with 3 to 9 members with a full time manager for that council. Out of 29 Utah Counties twenty three of them have selected the standard three member commission. The other six remaining counties have opted for different type of commissions like Cache County in fact selected a council which has seven members with a mayor who is being elected, Morgan County and Wasatch County also follow same type.

The wealthiest county of the state is Summit County with $40,270 per capita income. United States County and Wasatch ranks as the second and third in terms of having better per capita income after Summit County. Among the Utah Counties San Juan is the poorest county in the state. Of all Utah Counties San Juan County is the biggest county by area with 7,821 square miles while Davis County is the tiniest county geographically with 304 square miles.

The U.S. state of Utah has 29 Counties. This is list of Utah Counties and County Seats in alphabetical order along with check their population, areas and the date of formation.