Where is Seattle Located?

The given Seattle location map shows that Seattle is located in the north-west region of the United States and north-west part of Washington State. 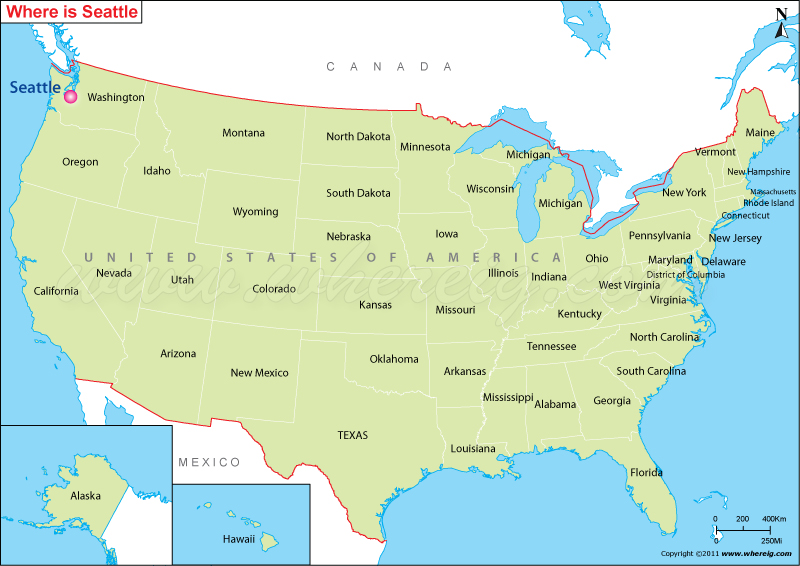 About Map: Map showing Location Map of Seattle in the Washington State, USA.

Where is Seattle Located?

Seattle is the northernmost major city on the mainland of the United States and the largest city of Washington State that situated nearby the narrow isthmus between Puget Sound and Lake Washington.

Hence, it is the major sea port of the north-western United States and major economic, cultural, and educational center. Above all, historically, Seattle has been known for indie rock and hip hop music. Seattle is the fourth-largest port in North America.

Name of the city i.e. Seattle is given after Chief Sealth "Seattle" of the Duwamish and Suquamish native tribes. The city is located merely about 140 miles south of Vancouver city of British Columbia Canada.

Interestingly, in the past Seattle was known with the name of "Queen City"; however, in the present, the official nickname of the city is the “Emerald City. Seattle is also recognized as the "Gateway to Alaska", Rain City and Jet City. The inhabitants of Seattle are known as Seattleites.

Moreover, Seattle became the first 'climate neutral city' by setting the goal of reaching zero net per capita greenhouse gas emissions by 2030 as per the report of February 2010.

Top Things to Do in Seattle

Top sights to visit in Seattle are: