Alabama County Map, List of Counties in Alabama with Seats

The U.S. state of Alabama is divided into 67 counties. Explore the Alabama County Map, list of Counties in Ohio along with their County Seats in alphabetical order along with their population, areas and the date of formation. 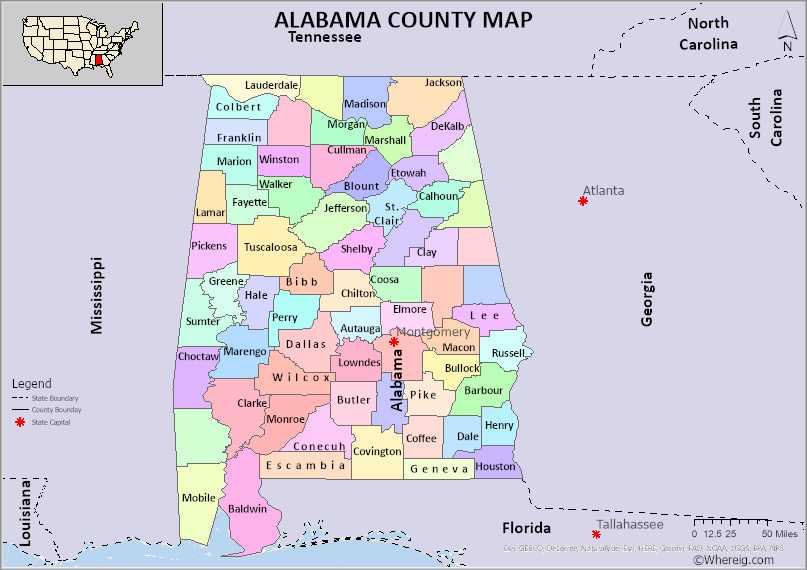 Alabama is one of the famous states of U.S.A Alabama has in fact beautiful mountains that would provide us a spectacular scenery. It indeed has got tall mountains and valleys that are deep. Alabama is surrounded four sides by different states towards north Tennessee, to the east Georgia, Florida to the south and Mississippi towards to the west. The number of Counties in Alabama is 67. It has 50645 sq mi area. Each county in Alabama provides and serves as the local administrative body within its territory. According to the census taken by U.S government in the year 2020 the average population of Alabama Counties is 74,989.

The most populous county in the state of Alabama is Jefferson with 674,721, while the least population county is Greene County. The coastline is approximately 53 miles. The major rivers of Alabama are Tennessee, Chattahoochee, Alabama and Coosa rivers. The largest lake is Guntersville. The cleanest lake in Alabama is Lewis Smith which is located in Winston. Smith lake seems to be very difficult to be believed because of its cleanliness, it is fascinating to see it. The geographic center the state is situated in Chilton County. The state is governed by three branches of government. They are Executive, legislative and judicial. The executive branch of government consists of three administrative bodies, they are Governor who is chief executive of Alabama state government, Lieutenant governor acts as the president and presiding officer of the Alabama senate, and Governor`s cabinet. The Governor administers the state from governor’s mansion which is located in Alabama.

The U.S. state of Alabama has 67 counties. Explore list of Alabama Counties and County Seats in alphabetical order and check their population, areas and the date of formation.