The U.S. state of New Jersey is divided into 21 Counties. Explore the New Jersey County Map, all Counties list along with their County Seats in alphabetical order and their population, areas and the date of formation. 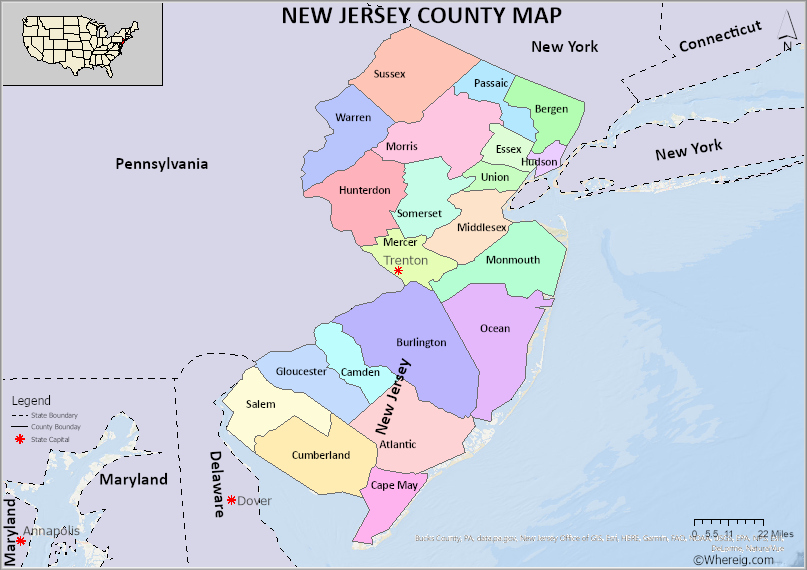 About Counties of New Jersey

U.S state of New Jersey is situated in the Mid-Atlantic and North-eastern part of the country. The state is bordered with the state called New York in the north and east, Atlantic Ocean lies to the east, southeast and south of the state, Delaware River and Pennsylvania are located to the west of the state. New Jersey is the fifth smallest state by area and the eleventh most populated state. The capital city of the state is Trenton.

Counties in New Jersey are 21 in number. These counties consist of 565 municipalities, administrative entities which are composed of 250 borough, 52 cities, 15 towns, 244 townships and 4 villages. Municipalities of all New Jersey Counties are classified as one of the five types of local government. They are Borough, City, Township, Town and Village. Counties of New Jersey are governed by a Board of County Commissioners that serves as the legislative and executive body. The board may consist of three, five, seven or nine members. The local government provides various services like health facilities like adult care, women`s health, child health, public services like waste collection, recycling and disposal, social care, schools, housing and planning , business support, registrar services and pest control.

Among Counties of New Jersey Bergen County has the highest density of population with 955,732. The other counties that have higher level of density of population are Essex County and Middlesex County with 863,728 and 863,162 respectively. Burlington County is the biggest county by area in the state of New Jersey covering 827 square miles. The smallest county in geographically is Hudson County. Counties in New Jersey are unique in its nature, as they have beautiful beaches busy roads, great food items diverse culture and so on.

The U.S. state of New Jersey has 21 Counties. This is list of New Jersey Counties and County Seats in alphabetical order along with check their population, areas and the date of formation.

List of Counties in New Jersey with County Seats