New York (NY) State, the 3rd most populous and 27th largest state in the United States, and is famous worldwide for Statue of Liberty, Niagara Falls and Wall Street. The capital of New York is Albany. New York State is subdivided into 62 counties. The state is bordered by Pennsylvania and New Jersey to the south and by Massachusetts, Connecticut, and Vermont to the east. 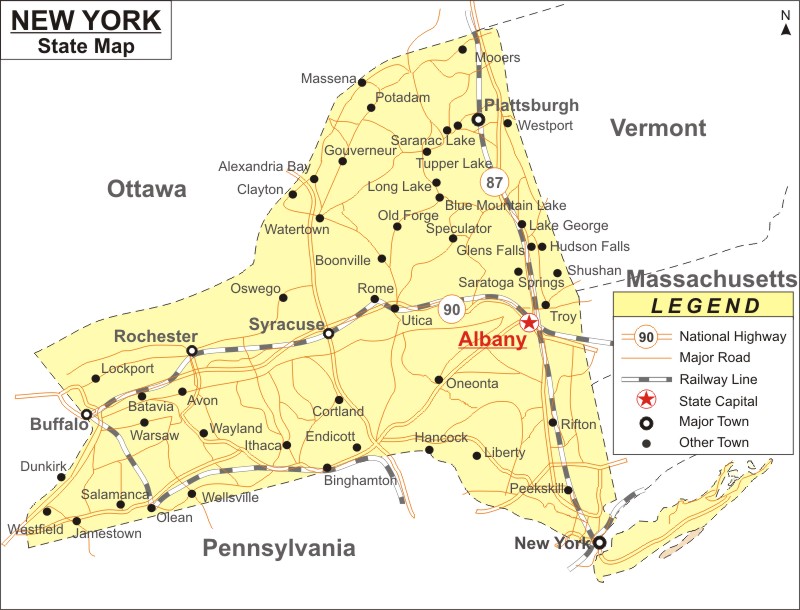 New York is the 11th state of the United States. New York Map offers a comprehensive overview of the location and heterogeneous landscape of the state. It also locates the international boundaries, state boundaries, state highways, interstate highways, railway lines, major towns and the state capital. The New York State Map points out the important cities of the state. Several rivers flow through the state. The Mohawk River, Hudson River and Genesee River are the prominent rivers of the state. Located at an altitude of 5,344 feet, Mt. Marcy is the highest point of New York. The Atlantic Ocean is the lowest point of the state. The capital of New York is Albany.

Situated in the northeastern part of the United States, New York has a total area of 54,556 sq miles, which includes a total land area of 47,213.79 square miles and a total inland water area of 7,342.22 square miles. With a total population of 19,453,561 (according to July 2019 Census Bureau estimate), it ranks as the 3rd most populated state in the U.S.
For administrative convenience, the State of New York is subdivided into 62 counties. The counties are governed by the county seats.
The state is bounded by Pennsylvania and New Jersey to the south, and by Massachusetts, Connecticut, and Vermont to the east. The state of New York has a naval frontier with Rhode Island to the east of Long Island. The state shares international boundaries with the Canadian districts of Quebec to the north and Ontario to the north and west.

Originally inhabited by the Algonquian and Iroquoian tribes, the region that is now NY was explored by the Dutch and claimed as New Netherland in the early seventeenth century. British settlers later annexed the colony, creating the Province of New York in 1664. New York was a major battleground during the Revolutionary War, and achieved statehood on July 26, 1788 as one of the original thirteen colonies.

Located in the north-eastern region of the United States, the state of New York is the third most populous of the 50 states in the U.S. The state of New York shares its borders with New Jersey, Pennsylvania, Connecticut, Massachusetts and Vermont. New York state is also bordered (through sharing a maritime border) with the states of Rhode Island and Canada.
The eastern part of New York state is dominated by the Great Appalachian Valley, while the northern part of the state includes Lake Champlain. This part also features the Hudson River. The western part of the valley features the Adirondack Mountains.

New York has the third largest economy of any state, after California and Texas. Its financial center, Wall Street, is the leading center of banking and commerce, and is home to the largest stock exchange in the world, the New York Stock Exchange. In addition to the financial and commercial institutions based in New York, it is also a major agricultural state, a strong producer of dairy products, apples, cabbage, cherries, and livestock.

The New York State is also named “The Empire State” for its profusion of wealth and diversity in resources. The state was named by the British to bestow honor at the Duke of Albany and York, the brother of King Charles II of England. It was then, in 1664 that New Amsterdam ceased to belong to the Dutch and the city as well as the state were named New York.
The fact that the state of New York has resplendent and enchanting tourist destinations to visit, it attracts millions of tourists every year. Major sites, include, Coney Island, Empire State Building, majestic Niagara Falls, Adirondacks' rugged mountains, the captivating Catskills, The Statue of Liberty, etc. The dominant features of the place are rivers, lakes, and streams.
The state also consists of various wildlife management areas, State Parks, and forests that are homes to hundreds of wildlife species and are open for public.

New York has an extensive network of roads and railways that provide comfortable intra and inter-state connectivity. The Interstate Highways of 81, 87, and 495 join the northern and the southern parts of the state. The eastern end of New York is connected with the western end of the state by Interstate Highways 84, 86, 88, and 90. The New York City Subway is one of the most popular urban mass transit systems in the world. The road transportation network of the state is dependent on the thruway, parkways, bridges, tunnels, interstate highways and other highways.

US Highways and State Routes in New York