FIFA World Rankings 2023 List - Check the FIFA ranking sponsored by Coca-Cola, ranking are based on their game results with the most successful teams being ranked highest. Brazil is the most recent Team of the Year followed by Belgium, Argentina, France, England and Italy. The full list of FIFA Football World Rankings is listed below. 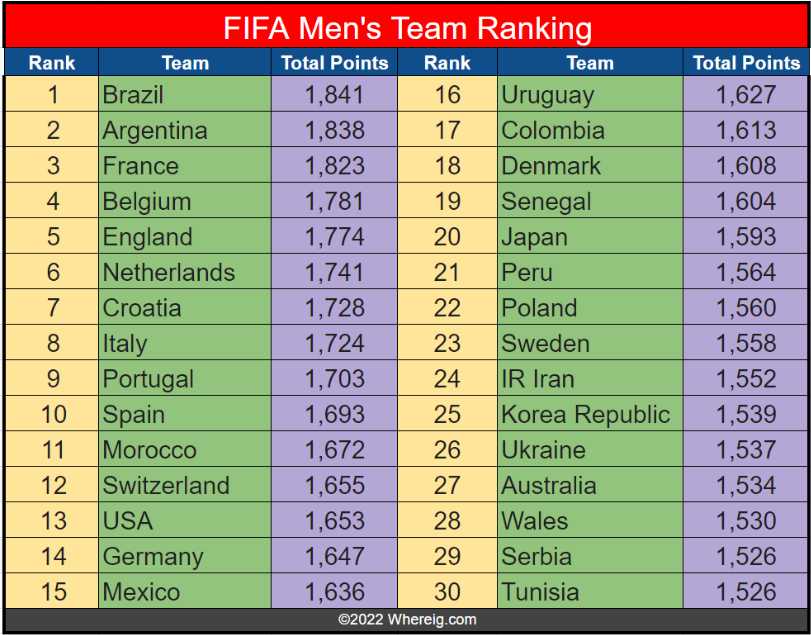 FIFA World Rankings 2023: FIFA Men's World Ranking is a ranking system for men's national football teams. The men's national teams of FIFA, the world governing organization of football, are ranked according to their game outcomes, with the highest ranked teams being placed at the top. In December 1992, FIFA World rankings were first introduced, and eight teams, which were at the top, were Argentina, Belgium, Brazil, France, Germany, Italy, the Netherlands and Spain. Brazil has held the number one FIFA ranking for the longest time. Brazil currently holds the top position in the FIFA World Ranking for men's national football teams.

The scoring for all full international matches that FIFA recognizes is determined using a points system. Numerous changes have been made to the FIFA ranking system in response to complaints that the previous methodology did not accurately reflect the relative strengths of the national teams. The Elo rating system used in chess has been incorporated into the FIFA ranking system's current iteration from August 16, 2018.

FIFA maintains that the FIFA World rankings provide "a valid metric for comparing national A-teams" and are used to rate the development and existing skill of the national football teams of its member nations. They are used in the computation or as the sole basis for seeding tournaments.

A new model for determining the FIFA/Coca-Cola World Ranking went into effect in August 2018 after being approved by the FIFA Council after extensive testing and analysis. FIFA created a new version of the World Ranking that they called "SUM," which relies on adding/subtracting points won or lost for a game to/from the prior point totals rather than averaging game points over a specified time period as in the previous version.

The FIFA World Ranking compares the 211 teams that make up the FIFA association. The number of games a club has won and how "important" those successes were, such as in big tournaments or against tough opponents, are among the criteria used to calculate the FIFA ranking. However, top-tier teams do not automatically qualify for the World Cup. Instead, since each region (also known as a "confederation") only has a limited number of slots, ranks are utilized for seeding in regional qualifying events. This implies that many lower-ranked teams ultimately qualify for the World Cup instead of higher-ranked teams. The most notable illustration of this for 2022 is Italy's national squad, which finished sixth and didn't make it.

This is Full List of FIFA World Men's Ranking as of 22 December 2022. As per the FIFA World Rankings 2022, Brazil stands in the first position with 1, 841 points. Belgium and Argentina rank as the second and third in FIFA rankings with 1,817 and 1,774 points respectively. France is in fourth and England is in fifth position in FIFA ranking 2022.

Members of FIFA according to their confederation

There are 6 regional confederations affiliated to FIFA, which oversee the game in the different continents and regions of the world.