As shown in the given Italy location map, Italy is located in southern Europe, It lies between latitudes 42.50° North and longitudes 12.50° East. Italy is bordered by France, Switzerland, Austria, and Slovenia and the Adriatic Sea, Tyrrhenian Sea, Ionian Sea, Ligurian sea, Gulf of Taranto, and the Mediterranean Sea.

Italy Location Map - Where is Italy located on the World Map? 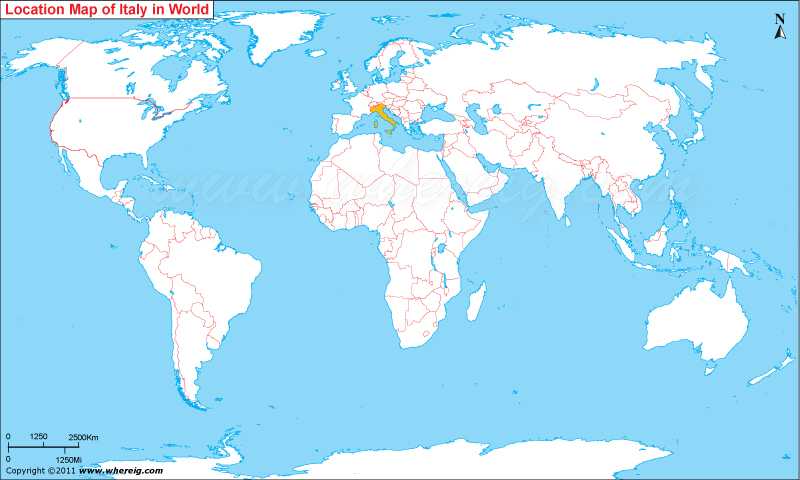 About Map: The Map showing location of Italy in the world map.

Where is Italy Located?

Italy is bordered by the Adriatic Sea, Tyrrhenian Sea, Ionian Sea, and the Mediterranean Sea.

Italy is a country located in the Southern Europe, between latitudes 35° and 47° N, and longitudes 6° and 19° E. Italy is bordered by the Adriatic Sea, Tyrrhenian Sea, Ionian Sea, and the Mediterranean Sea and shares land borders with 7 countries: Croatia, San Marino, Slovenia, Vatican City, Austria, Switzerland, France. Italy is comprised of the Italian Peninsula and a number of islands. It also surrounds two landlocked countries, San Marino and Vatican City.

Italy is a leading member of many institutions including the the European Union, UN, NATO, the OSCE, the WTO, the OECD, the G7, the G20, the Council of Europe, the Union for the Mediterranean, Uniting for Consensus and many more.

Largest cities or towns in Italy by Population

Regions of Italy and their capital cities