Missouri County Map, List of Counties in Missouri with Seats

The U.S. state of Missouri is divided into 14 counties and 1 Independent city. Explore the Missouri County Map, all Counties list along with their County Seats in alphabetical order and their population, areas and the date of formation. 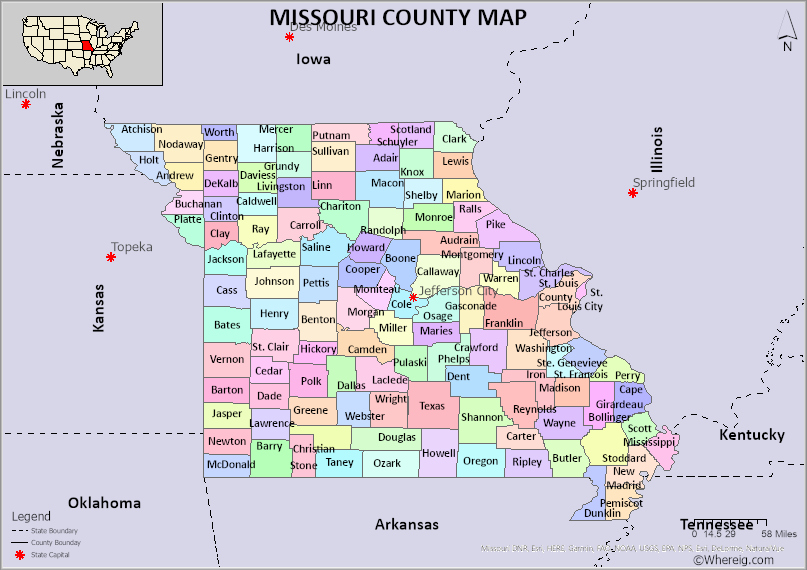 About Counties of Missouri

The U.S state of Missouri is located in Midwestern part of the country. Missouri occupies the twenty-first rank in land area to be specific the state has 68742 square miles and nineteenth rank as most populous state in United States of America. The state shares the borders with Iowa to the north, Illinois, Kentucky and Tennessee to the east, Arkansas lies to the south and Oklahoma, Kansas and Nebraska to the west. The state was named after the river ‘Missouri River’. The nick name for the state is ‘The Show Me State’. The capital city of Missouri is Jefferson City. According to the census of 2019, the population of the state is 61.4 lakhs.

According to the constitution of Missouri, Counties in Missouri are governed by three branches of the Government. They are executive branch, legislative branch and judiciary branch. The most important units of local government in the state are counties and cities. The counties are administered by commissioners who are elected. The cities of Missouri have been governed by the Mayors.

The U.S. state of Missouri is divided into 114 counties and 1 Independent city. This is list of Missouri Counties and County Seats in alphabetical order along with check their population, areas and the date of formation.