Montana County Map, List of Counties in Montana with Seats

The U.S. state of Montana is divided into 56 Counties. Explore the Montana County Map, all Counties list along with their County Seats in alphabetical order and their population, areas and the date of formation. 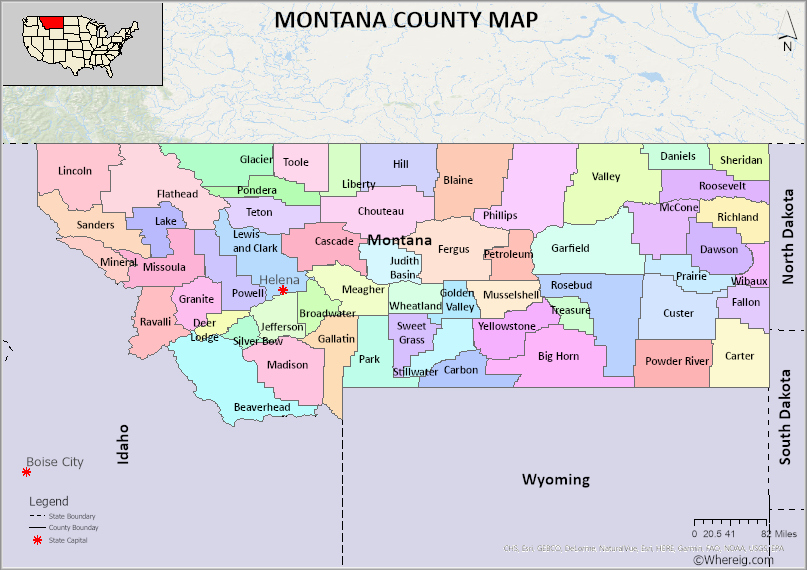 About Counties of Montana

U.S State of Montana is situated in the Western region of the country. Montana is the fourth biggest state by area. The state shares the borders with Idaho in the west, North Dakota and South Dakota in the East, Wyoming to the south and Alberta, British Columbia and Saskatchewan which are the provinces of Canada lie in the north. The state of Montana is spread over 145546 square miles that accounts for 376962 square kilometres. The state of Montana has various mountain ranges like western prairie and badlands. Montana has a lot of nicknames but none of them are official. Some of the nick names are ‘Big Sky Country’, ‘The Treasure State’, and ‘Land of the shining Mountains’.’ and ‘The Last Best Place.’

Montana like all other states of United States America follows federal government. It has a bicameral legislature consists of two chambers. Counties of Montana have local governance which is the public administration of cities, towns, counties and districts. Local government adds both county and municipal governance structures. At present, Montana has 56 counties along with 129 municipalities which include all the cities, towns, villages of the state. The citizens of Counties of Montana enjoy the electing their leaders.

The U.S. state of Montana has 56 Counties. This is list of Montana Counties and County Seats in alphabetical order along with check their population, areas and the date of formation.