Minnesota is located in the Midwest region of the United States. It is bordered by the states of North Dakota, South Dakota, Iowa, Wisconsin and the country of Canada. 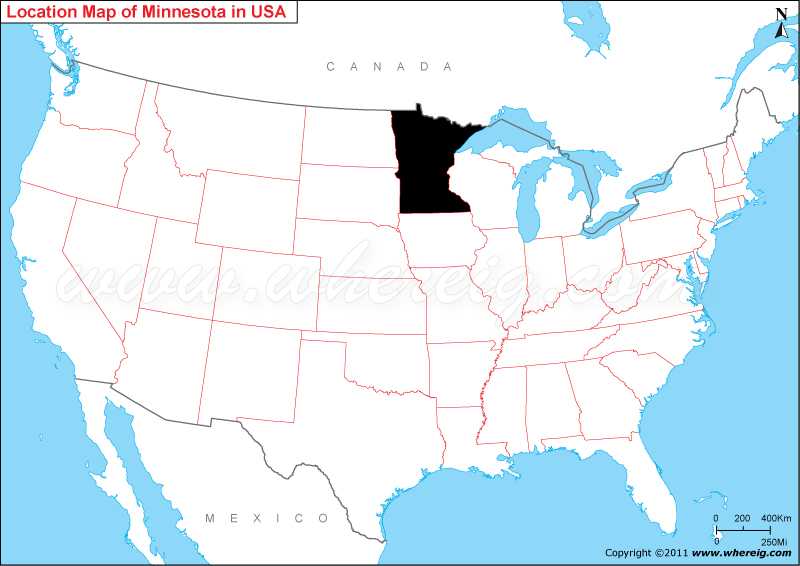 About Map: Map showing location of Minnesota in the US.

Where is Minnesota Located?

The given Minnesota location map shows that Minnesota is located in the north central United States. Map of Minnesota also shows that it shares its international boundary with Canada from the north side along with state boundary shared on the west by North Dakota and South Dakota, on the south by Iowa, and on the east by Wisconsin and Lake Superior. Minnesota is the 12th largest in area and the 22nd most populous State of the United States. Interestingly, Minnesota is more popularly known as 'Land of 10,000 Lakes’ and the state name is derived from a Dakota word which means sky-tinted water.

State’s largest city and capital city are Minneapolis and Saint Paul respectively; more than 60% of population lives in the Minneapolis-Saint Paul metropolitan area more popularly known as the Twin Cities.

Geographically, the state is located in the western prairies region; it is very fertile and suitable for agriculture. Surprisingly, Minnesota is known for its relatively liberal social and political point of reference because there is high rate of civic participation and voter turnout. Minnesota is counted among the healthiest states, and has a very literate population. The majority of residents are of German or Scandinavian descent and hence Minnesota is known as a center of Scandinavian-American culture.