Indiana County Map, List of Counties in Indiana With Seats

The U.S. state of Indiana is divided into 92 Counties. Explore the Indiana County Map, all Counties list along with their County Seats in alphabetical order and their population, areas and the date of formation. 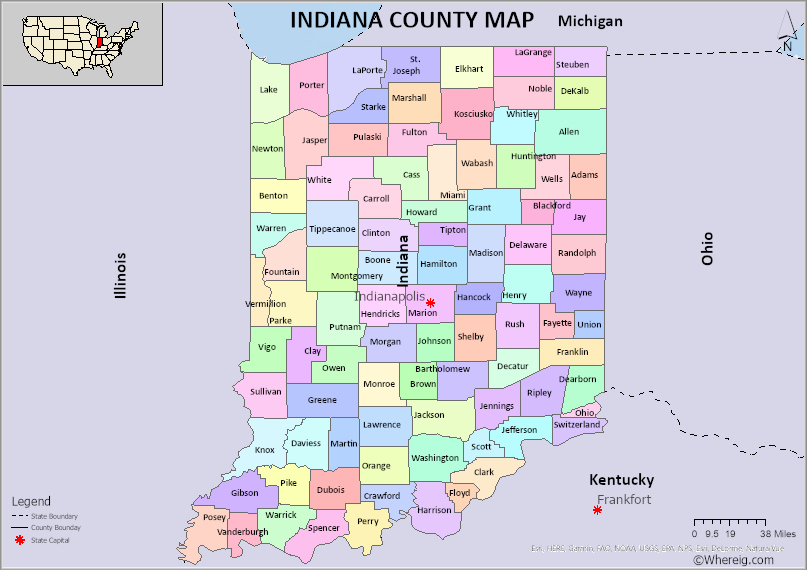 Indiana` s most populated county is Marion County with 860,454 inhabitants. The smallest county in terms of area and less population is Ohio County. There are approximately above 600 cities in the state. Among them the prominent ones are Indianapolis, Fort Wayne, Evansville and South Bend and many more. The richest city in the state of Indiana is Zionsville.

Indiana follows a constitutional democratic republican form of government. This form of government usually has three branches in which the power of the state rests on. They are executive branch which has an elected governor and lieutenant governor, the legislative branch that has General Assembly and the Judicial branch in which the Supreme court of Indiana is part and parcel along with Court of Appeals and other courts. The counties of Indiana play a vital role for local administration. County Government consist of County Council, Board of Commissioners and other Boards. Each county owns its own circuit court.

The U.S. state of Indiana has 92 Counties. This is list of Indiana Counties and County Seats in alphabetical order along with check their population, areas and the date of formation.