The 21st most populous state of United States, Colorado was named after "Colorado River". Colorado is also nicknamed as "The Centennial State. Denver is the capital and the most populous city of Colorado. Colorado is bordered by Wyoming, Nebraska, Kansas, New Mexico, Oklahoma and Utah. Colorado is one of the three US states with no natural border. Colorado is know for its beautiful landscapes. 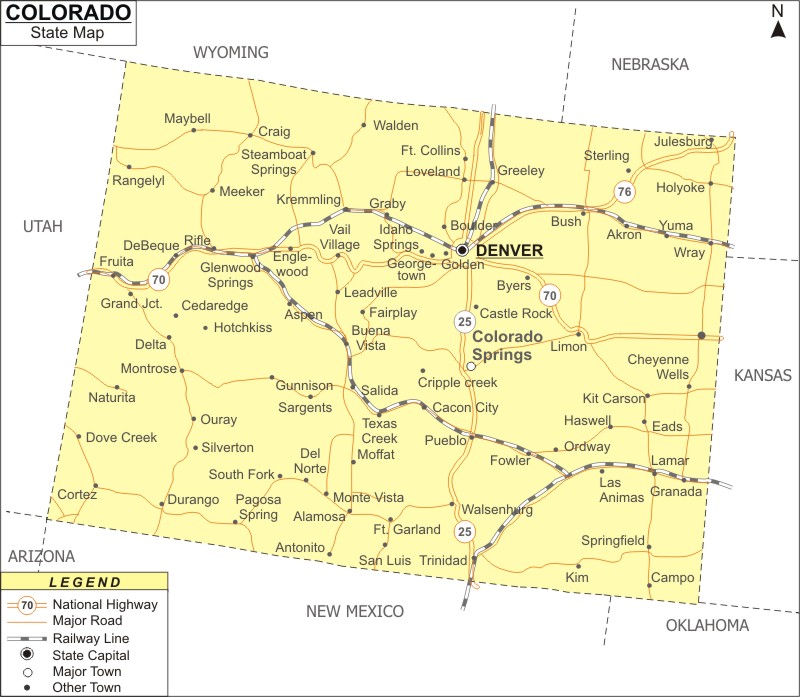 The Colorado State Map provides a comprehensive overview on the precise geographical position, diverse relief features and political divisions of the state. Colorado is situated in the Rocky mountainous part of the United States of America. Encompassing total area of 104,094 sq mi (269,837 km2), the State of Colorado shares its northern border with Wyoming and Nebraska, eastern border with Kansas and Nebraska, southern border with New Mexico and Oklahoma and western border with Utah. For administrative convenience, Colorado is divided into 64 Counties, which are efficiently governed by the respective County Seats.

Colorado is easily accessible from all parts of USA by well maintained roads and good railway network. The Interstate 25 is an important road route connecting the northern and southern part of Colorado.

The Colorado Map highlights the location of important towns, national and interstate highways, railway routes, and the capital city, Denver. Connecting the various cities of Colorado, Interstates 76, 70, and 25 represent a developed road transportation network. The wide-reaching road routes, along with the railway tracks of the state, are clearly indicated in the map of Colorado. A number of towns such as Kremmling, Durango, Campo, Byers, Silverton, Cortez, Holyoke, Leadville, Cacon City, Eads, Springfield, Montrose, Ouray, and several others are also shown, as well as the position of the state's 64 counties.

The Colorado state map is a significant indicator of all vital geographical features. Bordering states such as New Mexico, Nebraska, Utah, Wyoming and Arizona are also highlighted. Tourists coming to the state to explore its natural, historic, and scenic treasures will find the Colorado map to be a most helpful resource.