Alaska Borough Map, List of Boroughs in Alaska and Seats

The U.S. state of Alaska is divided into 19 Borough. Explore the Alaska Borough Map, list of Boroughs in Alaska along with their County Seats in alphabetical order along with their population, areas and the date of formation. 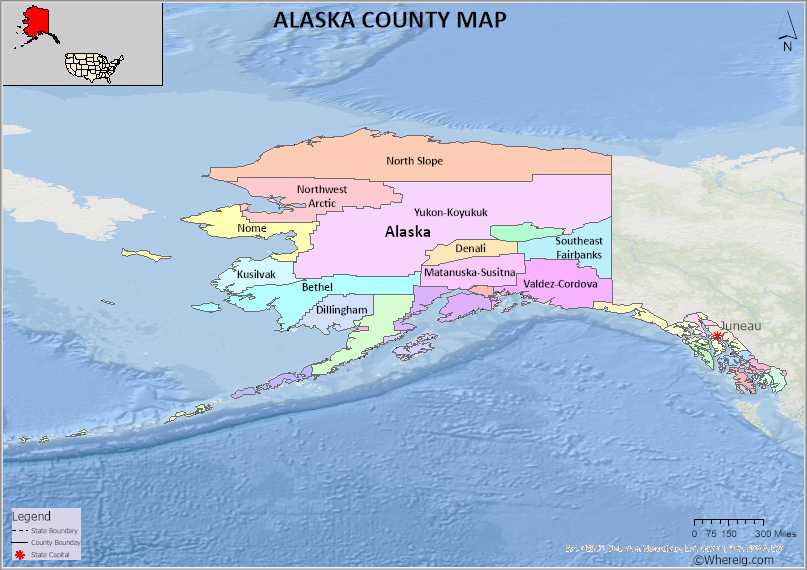 Alaska is located at the extreme northwest of North American continent. In fact, Alaska Peninsula is the biggest peninsula in the western Hemisphere. Since 180th meridian goes through one of the islands of Alaska namely Aleutian Islands, Westernmost part is in Eastern Hemisphere. Hence, we can technically say that Alaska lies in both Hemispheres. The state of Alaska is bordered by Canada to the east, the Pacific Ocean to the south, Chukchi Sea to the west and Arctic Ocean to the north. Alaska is the center point that connects North America with Asia by air or sea.

TThe state of Alaska means Great Land. The nickname of Alaska is Last Frontier. The state Capital is located in the southeast province of Alaska which is known as Juneau. There are 17 mountain peaks in Alaska. one of the amazing things about Alaska is, it has got 100 volcanoes. Indeed, the people of Alaska are blessed with 3000 rivers and 3,000,000 lakes. The largest of them is Lake Iliamna. Unlike other states of U.S, Alaska is not divided into counties. The state of Alaska is divided into boroughs. They are 19 organized boroughs and one unorganized borough. Alaska has got 144 cities all in all. The total land area of Alaska is 570641 square meters, which accounts for 1477953 square kilometers. The population of Alaska is expected to reach 734 thousand this year.

With regarding the administration, Alaska follows federal government as it is followed at the central level and it has three branches of government. They are state Legislature, executive and the judiciary system. Alaska has got two levels of local government. The city and borough. Borough is similar to county. Cities are divided into home rule and first-class Second-class cities. Same thing with borough as well, they are also divided into home rule and first class, second- and third-class boroughs.

The U.S. state of Alaska has 19 Boroughs. Explore list of Alaska Counties and County Seats in alphabetical order and check their population, areas and the date of formation.