Minnesota County Map, List of Counties in Minnesota with Seats

The U.S. state of Minnesota is divided into 87 Counties. Explore the Minnesota County Map, all Counties list along with their County Seats in alphabetical order and their population, areas and the date of formation. 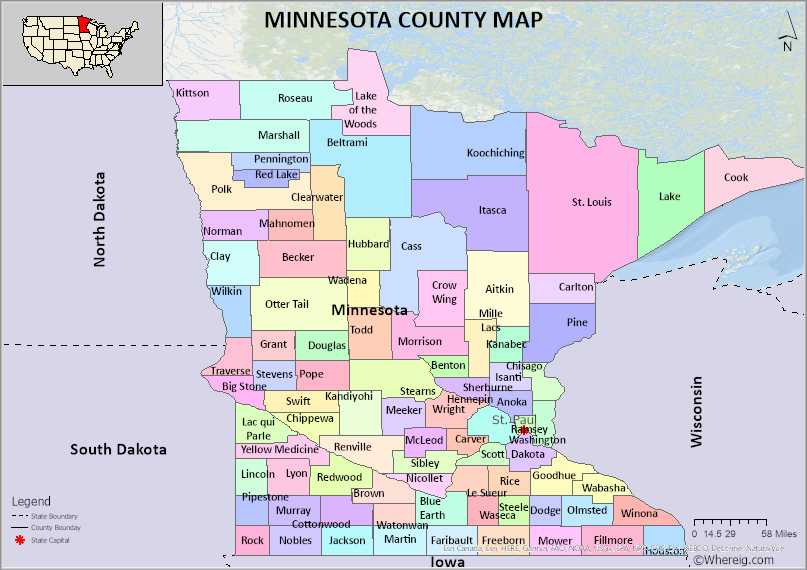 About Counties of Minnesota

U.S State of Minnesota is one among the states of United States of America that is located in upper Midwestern region of the country. The state got its name as Minnesota from the Dakota language. The state is also called as North Star State, Gopher State, Land of 10,000 Lakes, and Land of Sky-Blue Waters. Minnesota is the twelfth largest state of Unites State in area which spans for about 79627 square miles that accounts for 206232 square kilometres, and ranks twenty second most populous state in the country. The state shares the borders with Canadian regions of Manitoba and Ontario in north, North Dakota and South Dakota in west, Iowa in South and Wisconsin and Lake Superior in the east. The capital of Minnesota is Saint Paul. More than half of the population of Minnesota live in the Minneapolis which is nothing but Saint Paul. Saint Paul is also known as the “Twin Cities” which is very important for political, economic and cultural centre.

Counties of Minnesota are governed by an elected body of members. They are board of Commissioners and Administrative officers. These both board members serve the office for the tenure of 4 years. The local government of Counties of Minnesota is responsible for elections, law enforcement, court ,tax administration, tax assessment, planning and zoning , water management, and health and human services.

The U.S. state of Minnesota has 87 Counties. This is list of Minnesota Counties and County Seats in alphabetical order along with check their population, areas and the date of formation.