Florida County Map, List of Counties in Florida with Seats

The U.S. state of Florida is divided into 67 Counties. Explore the Florida County Map, list of 67 Counties in Florida along with their County Seats in alphabetical order and their population, areas and the date of formation. 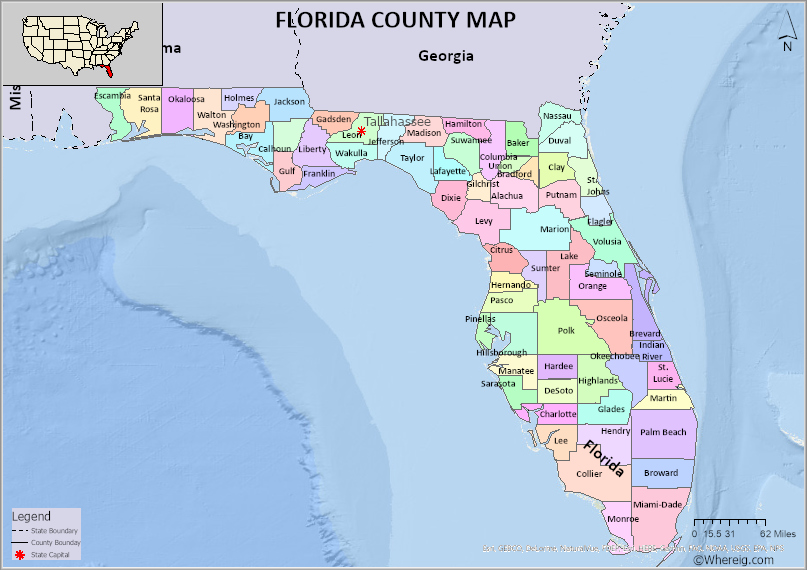 About Counties in Florida

Florida is one of the most popular states of United States of America which is situated in the South-eastern part of the country. The state is bordered by Gulf of Mexico to the west, Alabama to the northwest, Georgia to the north, Bahamas and Atlantic Ocean to the east, Straits of Florida and Cuba to the south. Spanning 53625 square miles, the state stands as 22nd state in the country in arena. ‘Sunshine State’ is the nickname of Florida. The capital city of the state is Tallahassee. Jacksonville ranks as the biggest and largest city of Florida. The smallest city in the state of Florida is Lake Buena Vista which has just 10 people.

Florida has 67 Counties. Among 67 counties of the state Collier County is the largest and biggest which has approximately 360,000 inhabitants with a total arena of 2,305 square miles. Union county takes pride in itself for being the smallest county. According to a national survey the richest county of Florida is St. County. The most populated county of Florida is Miami- Dade while Liberty County remains as the least populated county in the state of Florida.

Florida stands as the fourth largest economy in United States of America. Florida ranks 16th largest economy in the world. The essential sectors, which contribute a lot to state income are tourism, hospitality, agriculture, transportation and real estate. Florida has a lot of world’s famous beaches, amusement parks and attractions like Walt Disney World, Kennedy Space Center and Miami Beach. Florida is a fabulous and popular destination that attracts a lot of tourists from all over the world. Counties of Florida also contribute for the state budget a lot.

The Constitution of Florida guarantees various rights to its subjects at the same time it establishes the laws of the state as well in it. The state government has a wonderful structure of administration which consists of three individual branches: Executive, Legislative and Judicial.

The U.S. state of Florida has 67 Counties. This is list of Florida Counties and County Seats in alphabetical order along with check their population, areas and the date of formation. Click on any County for its detailed map.