Kansas County Map, List of Counties in Kansas with Seats

The U.S. state of Kansas is divided into 105 Counties. Explore the Kansas County Map, all Counties list along with their County Seats in alphabetical order and their population, areas and the date of formation. 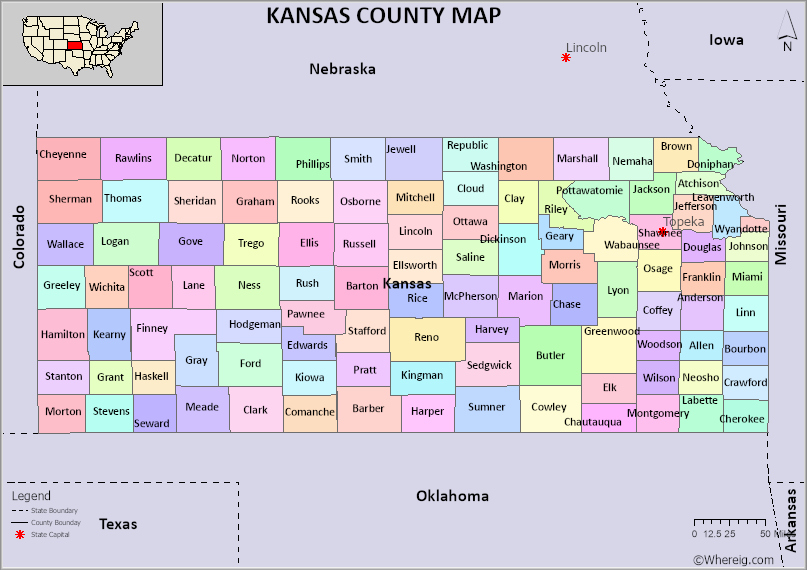 About Counties of Kansas

Kansas is one of the 50 states of United States of America which is located in Midwestern region of the country. The capital city of the state is ‘Topeka’. The state shares the borders with Nebraska towards north, Missouri to the east, Oklahoma to the south and Colorado to the west. The state occupies 81759 square miles, that accounts for 211,754 square kilometers. It is the 15th biggest state in terms of area and 31st most populous state in the country. The state of Kansas is divided into 105 counties and consists of 627 incorporated municipalities that comprised of cities. The biggest county of the state is Butler County which has got maximum area of land. The least populated county in the state is Greeley County.

The official nick name of Kansas is the ‘Sunflower State’. The state also is known as ‘The Jay Hawker state’ and ‘The Wheat State’. It is called as The Wheat State because the state produces more wheat than any other state in United States of America. Kansas’ most famous place to visit is Kansas Cosmos Space Center which is in Hutchinson.

The government of Kansas is established as per norms of the constitution of Kansas. The state follows Federal Government of United States. The state has got three branches of government and they are Executive branch, Legislative branch and Judicial branch. The executive branch consists of Governor, Lieutenant governor, The attorney general, secretary of state and state treasurer and so on. Legislative branch comprised of Kansas House of Representatives. Kansas` judicial branch is headed by Supreme Court of the state. County is considered as the basic administrative division of the state. Counties are again divided as cities and towns.

The U.S. state of Kansas has 105 Counties. This is list of Kansas Counties and County Seats in alphabetical order along with check their population, areas and the date of formation.