Alabama is the 30th largest state in the United States. It is known for its historical locations, beaches, monuments, and nature parks. The capital of Alabama is Montgomery and its biggest city is Birmingham. Hotels in Alabama are fitted with contemporary amenities to fulfill the requirements of various tastes. Birmingham-Shuttlesworth International Airport is the main airport in the state. 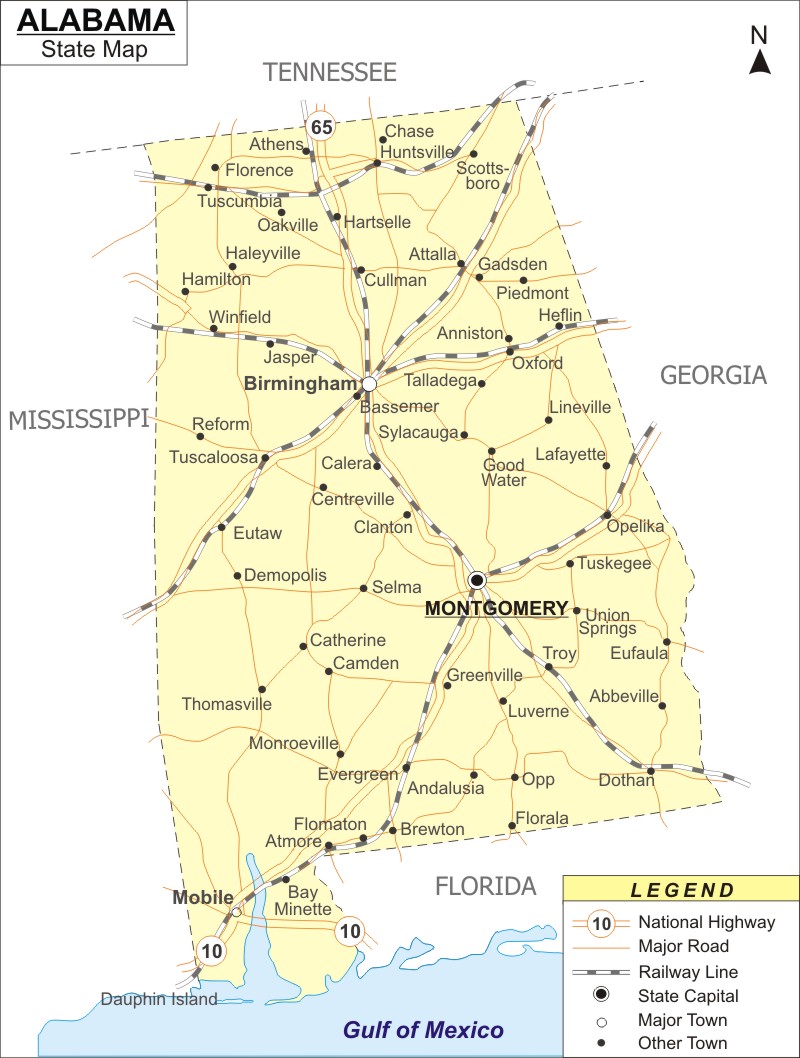 The State of Alabama is well connected with the rest of the country by good roads and railway system. The Alabama State map indicates the climatic condition, natural vegetation and notable cities of the state. The capital city of Alabama is Montgomery.

The other prominent cities of the state are Huntsville, Birmingham, Tuscaloosa and Mobile. Alabama is also known as the Cotton State and Heart of Dixie. Alabama State was founded on the 14th of December, 1819. Yellowhammer, Camellia, Southern Pine are respectively the State Bird, State Flower and State Tree of Alabama. The map of Alabama further denotes the relief features and tourist attractions of the state.

High mountains and fertile plains are the characteristic topographic features of the state. Rosa Park, King Center, USS Alabama and Bellingrath Gardens are some of the prominent tourist destinations of Alabama.

The exotic beaches in the Gulf Coast are other prime attractions of the state. The museums and libraries of Alabama reflect the rich literary and archeological legacy of Alabama.

Alabama, the 22nd state of the United States, is situated in the southeastern part of the country. The state encompasses a total area of 52,419 sq miles. The state of AL shares its boundaries with the U.S. states of Georgia, Tennessee, Gulf of Mexico, Mississippi, and Florida. An Alabama Map helps the first time visitor in the state precisely locate all the major places of interest in the Yellowhammer State. The state of AL is famous for a host of sightseeing spots such as beaches, nature parks, monuments, and historical locations. The capital of Alabama is Montgomery but the biggest city is Birmingham.

The state of AL houses the following tourist attractions:

Other popular tourist attractions in the city include the following: